William Tecumseh Sherman (February 8, 1820 – February 14, 1891) was an American soldier, businessman, educator, and author. He served as a General in the Union Army during the American Civil War (1861–65), for which he received recognition for his outstanding command of military strategy as well as criticism for the harshness of the "scorched earth" policies that he implemented in conducting total war against the Confederate States. Military historian Basil Liddell Hart famously declared that Sherman was "the first modern general".

Sherman served under General Ulysses S. Grant in 1862 and 1863 during the campaigns that led to the fall of the Confederate stronghold of Vicksburg on the Mississippi River and culminated with the routing of the Confederate armies in the state of Tennessee. In 1864, Sherman succeeded Grant as the Union commander in the western theater of the war. He proceeded to lead his troops to the capture of the city of Atlanta, a military success that contributed to the re-election of President Abraham Lincoln. Sherman's subsequent march through Georgia and the Carolinas further undermined the Confederacy's ability to continue fighting. He accepted the surrender of all the Confederate armies in the Carolinas, Georgia, and Florida in April 1865.

When Grant became president, Sherman succeeded him as Commanding General of the Army (1869–83). As such, he was responsible for the conduct of the Indian Wars in the western United States. He steadfastly refused to be drawn into politics and in 1875 published his Memoirs, one of the best-known firsthand accounts of the Civil War.

Charles Beaumont in the 'Twilight Zone' episode "Long Live Walter Jameson" has the lead character (a history professor) comment on the burning of Atlanta; that the union soldiers did it unwillingly at the behest of a Sherman described as sullen and brutish.
[All from Wikipedia]

Most of the appearances of General Sherman in Toobworld deal with his later years as he toured the West as the Commanding General of the Army. 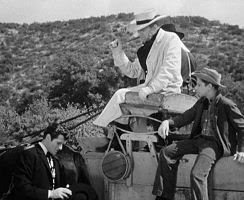 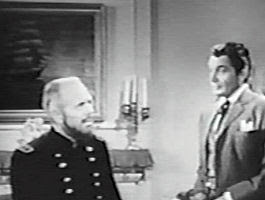 In that first picture, Wyatt Earp is seen greeting General Sherman outside of Dodge City in 1877. (Wyatt mentions that the Civil War has been over for twelve years.) In the second one, Sherman is with Bat Masterson, back in Dodge City three years later. (The narrator mentions that it's 1880.) Earlier Sherman dodged Dodge City because he was fed up with speeches, reporters, and the antagonism of those who still carried a grudge against him. But when he returned in 1880, it was to accompany President Rutherford B. Hayes on his campaign swing through the West for re-election.

As to the difference in their looks within the reality of Toobworld, Sherman looks older in the earlier picture because he had been spending the last decade travelling all over the wild, wild West on inspection tours and the life on the road wore down on him. By the time he ws campaigning for President Hayes, he had groomed himself for a more presentable image; perhaps even trimmed down his beard and colored it. 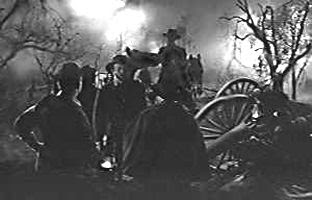 In this last picture, that's John Wayne (billed as Michael Morris) as Sherman, in Major Adams' flashback to the days when he knew Sherman and General Ulysses S. Grant. (The episode was directed by John Ford!)

Wayne as Sherman is another example, like Peter Falk as Abe "Kid Twist" Reles mentioned a few days ago here, of an actor playing the same role in Toobworld as well as in the movie universe. (For his headshot, I'm using a publicity photo from 'How The West Was Won'.)

If I had my druthers in casting William Tecumseh Sherman for today's TV, based on that photo of the real Sherman, I'd pick Dean Stockwell to play the role. Just sayin', is all......

I'd go with Scott Glenn to play the role.

Brent McKee said...
This comment has been removed by the author.
1:24 AM