Today is Veteran's Day, and as we hope it is to be a tradition here at Inner Toob, we're saluting a particular TV character who served TV-America ("Telemerica") in the military. (On Memorial Day, we remember a TV character whom we've since lost.) In the past, we've honored Admiral Harriman Nelson ('Voyage To The Bottom Of The Sea'), Mac Tyler ('CSI:NY') and Leroy Jethro Gibbs ('NCIS').

This year on 11/11, we're focusing on the distaff side of the military with perhaps the most famous woman who ever served in the armed forces of Toobworld.

MARGARET J. HOULIHAN
Major, Army Nurse Corps
#RA31619185
Major Houlihan, once saddled with the nickname of "Hot Lips", devoted her life to her Army career (perhaps due to the influence of her father and role model, Colonel Alvin "Howitzer Al" Houlihan). Being an army brat, she grew up on bases, with most of her childhood spent at Fort Ord. She enlisted after graduating from nursing school and served in World War II, more than likely towards the tail end of the war. (I make her as having been born somewhere between 1916 and 1919.)

Despite her love for her career and her idolization of her father, Margaret may not have been truly happy in the Army life, and may have felt alone, creating a void that she was only able to fill with illicit sex. This is what probably drove her into an ill-fated affair with a married officer, Major Frank Burns. And it could be the root cause of her alcoholism. But Margaret recognized she had a problem and learned to deal with it. 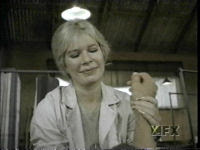 Margaret maintained strict discipline over her approach to her job and expected the same from others, especially from the nurses in her charge. Although she had a rocky relationship with her late superior officer, Colonel Henry Blake, at the 4077th M*A*S*H unit,
Margaret saw his replacement, Colonel Sherman Potter, as something of a father figure.

A muck-raking Congressional aide tried to have Major Houlihan branded as a Communist sympathizer, and all because of an innocent college tryst many years before. But he was only doing this in order to win sexual favors for himself. Luckily, he was blackmailed by Margaret's fellow doctors and other defenders to slink back to Washington with his tail between his legs.

When the show ended, Margaret was on her way back to the US to take up a position in an Army hospital, despite her father pulling some strings to get her assigned to a more prestigious position. 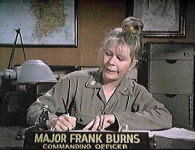 Among the awards which Major Houlihan has been personally presented:

And she would have had many more from her service during World War II as well.....

I see no reason not to believe Margeret Houlihan is still alive. She'd be in her nineties by now, and probably spent most of her life after Korea alone. She may have had a few long-running relationships, perhaps even with Dr. Benjamin "Hawkeye" Pierce if their parting at the end of the war was any indication about how they truly felt about each other. But in the long run, I don't think any man could have measured up to the exacting demands Margaret would have placed on them, just as she did on herself.

(A quick Google search shows there's a piece of fanfic floating out there in which Margaret Houlihan survived into the time of 'Star Trek', thanks to bio-genetic engineering during the Eugenics Wars!) 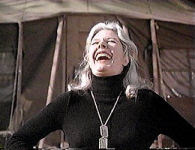 So here's to you, Major Margaret Houlihan. Toobworld Central salutes you and your service to your country.

There's a tantalizing hint of Margaret's possible World War II service in a made for TV movie called Fireball Forward. The movie first appeared in 1972 - the same year that MASH showed up on TV. It starred Ben Gazarra, Eddie Albert, Dana Elcar and Ricardo Montalban and is about Gazara's character taking over a hard luck division and working out who is passing information on the unit's operations to the Nazis. In one scene though, Gazarra is touring units under his command, one of which is a field hospital where he talks to the nurses to find out what they need. The spokesman for the nurses - in an uncredited role - is Loretta Swit. Could this possibly be our Margaret?

(Oh, and you may recall that as Margaret's marriage to Donald Penobscot is disintegrating, Margaret and Hawkeye had a "brief encounter" that commitment phobic Hawkeye worried might turn into >gasp< a relationship.)

Hey, if he didn't want her, I'd take her. I get stiff and drool every time I see her.