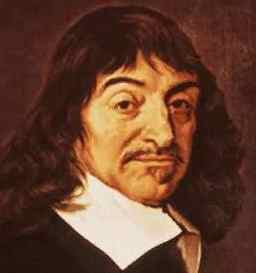 November 10, 1619:
René Descartes has the dreams that inspire his Meditations on First Philosophy.
René Descartes (March 31, 1596–February 11, 1650), also known as Renatus Cartesius, was a highly influential French philosopher mathematician, scientist, and writer. He has been dubbed the "Father of Modern Philosophy," and much of subsequent Western philosophy is a response to his writings, which continue to be studied closely to this day. In particular, his "Meditations" continues to be a standard text at most university philosophy departments. Descartes' influence in mathematics is also apparent, the Cartesian coordinate system allowing geometric shapes to be expressed in algebraic equations being named for him. Descartes was also one of the key figures in the Scientific Revolution.
[from Wikipedia]
Originally I was going to write about Major Henry Wirz, who was the only man hanged for war crimes after the American Civil War. He had been the commandant of the Andersonville prison camp and was portrayed by Richard Basehart in the teleplay of "The Andersonville Trial", directed by George C. Scott.

But this entry about Rene Descartes gives me the opportunity to post this:
Immanuel Kant was a real piss-ant who was very rarely stable.
Heideggar, Heideggar was a boozy beggar who could think you under the table.
David Hume could out-consume Wilhelm Freidrich Hegel.
And Whittgenstein was a beery swine who was just as sloshed as Schlegel.
There's nothing Nieizsche couldn't teach 'ya 'bout the raising of the wrist.
Socrates, himself, was permanently pissed.
John Stewart Mill, of his own free will, after half a pint of shanty was particularly ill.
Plato, they say, could stick it away, half a crate of whiskey every day!
Aristotle, Aristotle was a bugger for the bottle,
And Hobbes was fond of his Dram.
And Rene Descartes was a drunken fart:
"I drink, therefore I am."
Yes, Socrates himself is particularly missed;
A lovely little thinker, but a bugger when he's pissed.