For February, traditionally Black History Month, we're honoring a TV character who might be considered all that's wrong with the portrayal of blacks in Toobworld......

GRADY WILSON
"Sanford and Son" (1972)
"Grady" (1975)
"Sanford Arms, The" (1977)
Grady could have been seen as a replay of the "Lightin'" type of characters portrayed by Stepin Fetchit and others in the first half of the Twentieth Century.

But Norman Lear and his writers turned the image upside down and did a pretty good job at removing the offensive quality to the character. (And a lot of that credit must also be given to Whitman Mayo, who played the role.)
The audience could tell that it was mostly an act with Grady, that he was putting on a show so that people wouldn't catch on to what he was really like. And that way they would dismiss him from consideration and relax their gaurd around him.
Lt. Columbo and Casca were much the same way.

Here's what they wrote at Wikipedia about Grady Wilson:

Grady Wilson is the name of a fictional recurring character on the NBC sitcom Sanford and Son played by the late Whitman Mayo.
Grady is the scatterbrained best friend of Fred Sanford (Redd Foxx), the proprietor of "Sanford and Son", a junk and antique business in Watts. Grady is portrayed as an elderly, feeble man, known for his stooped appearance and his grey hair and beard. He is most commonly seen wearing an oversized, pale-blue sport coat and walks with a slow shuffle. He often stops by Fred's house to drink and play cards, and he regularly accompanies Fred in his various schemes, much to the chagrin of Fred's son Lamont.

He is sometimes referred to by Fred as "Shady Grady".
Grady is extremely absent-minded and regularly forgets the names of people he knows—- especially Lamont. When Grady asks him his name, Lamont often responds by sarcastically giving him a similar name (such as "Lucas" or "Lawrence"), which Grady then acknowledges. (Ironically, Grady is actually named after Demond Wilson, the actor who played Lamont on the series. His full name is Grady Demond Wilson. He frequently confuses certain words, upon hearing them, for anything similar-sounding (such as referring to the "munchies" as "Munchkins").
Grady often refers to his old age, or his impending death, or the deaths of his and Fred's friends. He also frequently inadvertently insults Fred's sister-in-law Esther, by telling her something Fred has said about her. He is often easily alarmed or surprised, and when excited, he is known to exclaim his catch phrases, "Good goobily goop!" or "Great googly moogly!"
For a time during the series run, Fred was "out of town" (due to a salary dispute between Foxx and NBC), leaving Grady in charge of Fred's business, effectively making Grady the main character on the show. During Fred's absence, Grady moved into Fred's house, and also took over the role of Lamont's comic foil.
Grady appeared on Sanford and Son from 1973 until 1977. During this time, Mayo also starred in a TV series about the character, Grady. In this series, Grady moves out of Watts to live with his daughter. The show was short-lived, and he eventually returned to Sanford and Son. Mayo reprised the role of Grady again in the show's short-lived spin-off The Sanford Arms, in which Grady is married to his former girlfriend, Dolly. 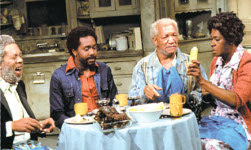 The blog "Having A Wonderful Time" inducted Grady into their own TV Hall of Fame last year and provided this memory of the character:

"I remember an episode where Grady was fighting with Fred over a certain TV that Mr. Sanford had purchased for fifty bucks at a local bar. The TV was the same one that was stolen out of Grady's house a few days prior (He had recognized it by the scratches on the side of the paneling). If you haven't seen the episode and are concerned about the two friends fighting, don't fret. When Lamont called the poe-lease which of course were played by two dumb white dudes, they find that the TV was stolen from someone else before Grady bought it."

So from all of me here at Toobworld Central, I would now like to present Mr. Grady Wilson as the TV Crossover Hall of Fame inductee for February 2008.

Grady was always my favourite character on Sanford and Son. And I liked his spinoff series (although I missed him on Sanford and Son). I have to say you captured Grady perfectly. He was a lot like Columbo--a lot smarter than he appeared.