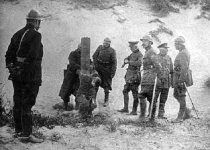 "To The Last Man", the latest episode of 'Torchwood', touched on a sensitive topic that was still timely even ninety plus years later.

In 2006, the British government pardoned about 306 men who were hauled before firing squads in World War I for desertion or cowardice after summary trails. (At least 23 of them were from Canada.) Britain is now formally acknowledging that many of the men suffered shell-shock from the horrors of trench warfare and relentless roar of artillery.

Particularly since the 1960s there has been some controversy concerning 346 British and Imperial troops — including 25 Canadian, 22 Irish and 5 New Zealand troops — who were shot for desertion, murder, cowardice and other offences during the War, some of whom are now thought to have been suffering from combat stress reaction or Post Traumatic Stress Disorder (or "shell-shock" as it was then known). This led to organisations, such as the Shot at Dawn Campaign which were set up in later years to try and uncover just why these soldiers were executed.

In 1993, Britain's then prime minister, John Major, ruled out such pardons saying, "we cannot rewrite history by substituting our latter-day judgment for that of contemporaries."

This time, the British parliament was swayed and the recent campaigns have already drawn more visitors to the graves of those executed. Some leave little crosses on the graves, decorated with poppies and bearing handwritten messages. "Justice at last. God bless you," reads one anonymous note.
"It is better to acknowledge that injustices were clearly done in some cases," said British Defense Secretary Des Browne. "All these men were victims of war."
"I hope that pardoning these men will finally remove the stigma with which their families have lived for years."
The great-niece of one of those men executed doesn't think the pardon is enough however, because a pardon does not equal an exoneration. Jill Turner said, "Underneath, some shame is still there."
BCnU!
Toby OB
Posted by Toby O'B at 10:44 AM