The televersion of Hercule 'Poirot' once again found his Toobworld life melding with real world history in the episode "The Theft Of The Royal Ruby" when he took on a case for Prince Farouk, who would become the King of Egypt in 1936 until 1952.

Farouk I of Egypt (Faruq al-Awwal) (February 11, 1920 – March 18, 1965), was the tenth ruler from the Muhammad Ali Dynasty and the penultimate King of Egypt and Sudan, succeeding his father, Fuad I, in 1936. His sister Fawzia was Queen of Iran for 8 years. His full title was "His Majesty Farouk I, by the grace of God, King of Egypt and of Sudan, Sovereign of Nubia, of Kordofan and of Darfur." He was overthrown in the Egyptian Revolution of 1952, and was forced to abdicate in favor of his infant son Ahmed Fuad. He remained loyal to his country even after his exile. He died in Italy.
According to Wikipedia, David Suchet modeled his mustache for detective Hercule Poirot on King Farouk's. 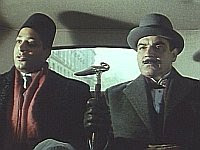 But in Toobworld, Farouk has no mustache when he meets Poirot. So I think something of the reverse was in effect within the TV universe. The Prince liked the Belgian detective (who could not return the sentiment), and so perhaps he was inspired to grow his mustache based on Poirot's example. 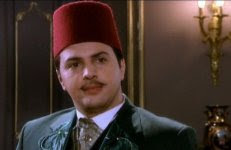 In 2007, the Arabic satellite channel MBC produced an Egyptian television series titled 'El Malek Farouk' about the life of Farouk. The series starred a wide array of popular and talented Egyptian actors, though the lead role was played by Syrian actor Taym Hassan. The series aired daily on MBC during Ramadan.

Getting the free pass afforded by aging when it comes to recastaways, a link could then be made between 'Poirot' and 'El Malek Farouk'.