I alluded earlier to the fact that the FCC has levied a fine of over a million bucks on ABC for airing a scene in which the character of Connie (played by the lovely Charlotte Ross) was caught naked in the bathroom after taking a shower by Andy Sipowicz's son Theo.

Timely as always, the scene was from an 'NYPD Blue' episode called "Nude Awakening" from 2003. Stupid, bureaucratic FCC, acting with partisan politics in mind!

ABC isn't going to let this issue slide by even thinking about paying the fine. They plan to fight and a good thing too!

Here was their statement in response to the action:

"NYPD Blue, which aired on ABC from 1993-2005, was an Emmy Award-winning drama, broadcast with appropriate parental warnings, as well as V-chip-enabled program ratings from the time such ratings were implemented. When the brief scene in question was telecast almost five years ago, this critically acclaimed drama had been on the air for a decade and the realistic nature of its story lines was well known to the viewing public."

My one hope is that from all of this brouhaha, Charlotte Ross might find herself more in demand as an actress. Toobworld can't help but benefit from seeing more of her on the small screen. 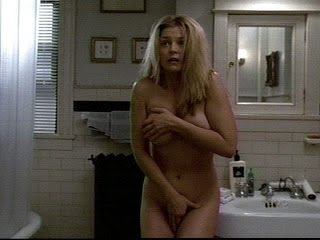 Not that we didn't see more of her in that episode. Homina thrice!

Labels: O'Bservations, Outside the Box, Tele-Folks Directory, Twipped from the Headlines, Wish-Craft

This sort of thing would never happen in Canada. In fact there wouldn't be complaints about the scene even if it ran at 7 p.m. It might even get a PG rating (with a warning about nudity). There are regulations about sexual content but Charlotte Ross's nudity has absolutely no sexual context - far less in fact than other NYPD Blue episodes. There are issues of precedent (like ten years of nude scenes on the show before this one against which no action was taken). To quote Norman Schwartzkopf, this reeks of "Bovine Scatology."