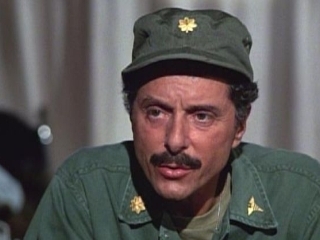 From Wikipedia:
"Radar’s Report" was the 27th episode of 'M*A*S*H', and third of season two. The episode aired on September 29, 1973. This was the first episode to feature Allan Arbus as Army psychiatrist Dr. Freedman. In this episode, he is called "Milton Freedman"; in later episodes, the character is renamed "Sidney Freedman".

Synopsis:
After Frank mistakes Klinger for Margaret, the two majors decide to get rid of Klinger. They convince Col. Blake to have Klinger undergo a psychiatric evaluation. Dr. Milton Freedman (Allan Arbus), an Army psychiatrist, interviews Klinger, and tells him that although he believes Klinger to be sane, he is willing to grant him a Section 8 discharge if he will sign a report confirming that he is a transvestite and a homosexual (a report which Freedman notes will follow him into civilian life). Insisting that he is neither ("I'm just crazy!"), Klinger refuses to sign, and Freedman files a report saying that Klinger is sane.

I never understand why TV series will have continuity guides if they don't end up following them. Those guides are called bibles, and you're not supposed to break faith with your bible, right?

The good doctor's full name was Milton Sidney Freedman. Since this was his first visit to the 4077, they addressed him by the name listed in his "jacket". Only later, as he got to know them better, did he let them know that he preferred to be known by his middle name. And from that point on, they called him "Sidney".

Could there have been a reason? There are probably dozens, if not more. Maybe he thought "Sidney" sounded stronger than "Milton"... or that it lent itself better as a connection to his chosen field of study. Perhaps there was another Dr. Freedman whose first name was Milton. Maybe even his own father, which opens up issues Sidney might need to address with his own psychiatrist.

At any rate, it wasn't an insurmountable Zonk so we didn't need to get Colonel Potter to yell "Bug out!"

Allan Arbus, who portrayed Sidney Freedman, just passed away at the age of 95. A very respectable age.

As for Dr. Freedman?

If he was the same age during the Korean Conflict as Arbus was during the show's production, then he was 65 when the war ended (looking remarkably fit for his age!) Another thirty years of life after that and the televersion of Dr. Freedman died in 1983, the same year Arbus filmed the final 'M*A*S*H' episode in the Trueniverse.

In closing, I'd like to leave you with the 'M*A*S*H' quote most often associated with Dr. Freedman:

"Ladies and gentlemen, take my advice -
pull down your pants and slide on the ice."

(This is dedicated to Robin Douglas, who gave me the idea.....)

Labels: As Seen On TV, By Any Other Name, Game of the Name, Hat Squad, La Triviata, O'Bservations, Splainin 2 Do, TV Classique, TV timeline, Twipped from the Headlines, Wikipediaphile