LEAGUE OF THEMSELVES - DAVID DUCHOVNY 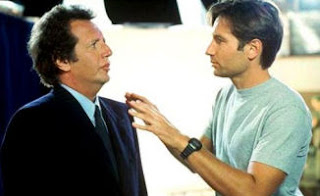 AS SEEN IN:
'The Larry Sanders Show'

From Wikipedia:
David William Duchovny (born August 7, 1960) is an American actor, writer, and director. He is best known for playing Fox Mulder on The X-Files and Hank Moody on Californication, both of which have earned him Golden Globe awards.

Some of the most famous episodes of ['The Larry Sanders Show'] were made in [Season 5]: "Everybody Loves Larry", in which Larry starts suspecting that David Duchovny has sexual feelings for him.

David Duchovny received a nomination for Outstanding Guest Actor in a Comedy Series [during this time].

For more pictures from his appearances on the show, click here. 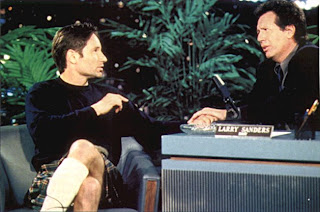 Labels: As Seen On TV, League of Themselves, Life During Prime-Time, TV On TV, Wikipediaphile