LEAGUE OF THEMSELVES - JACK BENNY


In the first organized year of the TV Crossover Hall of Fame, Jack Benny was inducted as a member of the League of Themselves.  He had created a fictional caricature of himself which he parlayed into show business legend - so much so that it was rare when he was seen on TV as anybody but his fictional televersion.  (Offhand, I can only think of his appearance in that patriotic John Wayne special as the guy who found the coin tossed across the Potomac by Washington.  But I know there are others.)

So it's not surprising that if Danny Williams and his family saw somebody who looked like Jack Benny in Las Vegas, most likely it would be Jack Benny...... 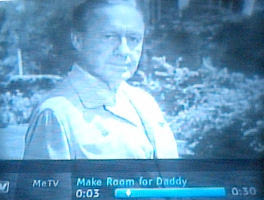 AS SEEN ON:
'Make Room For Daddy'
"Lose Me In Las Vegas"

SYNOPSIS:
While the Williams family was vacationing in Las Vegas, Rusty kept pestering his dad for a dime to buy an ice cream.  Finally he said all he needed was a nickel because a man offered to put up the other half and they could split the ice cream.  When Rusty pointed him out, Jack Benny turned tail and sauntered away.

Labels: As Seen On TV, Hall of Fame, League of Themselves, Museum Piece, O'Bservations, Tele-Folks Directory