The following is from the Morning Spoilers column at io9:

Here's an insane, thoroughly unsourced rumor floating around that the 50th Anniversary special's major guest star, legendary actor John Hurt, is going to be playing... the Doctor. And not just some future or alternate Doctor, but the real 9th Doctor, an incarnation that was somehow forgotten in the insanity of the Time War. And in case you're thinking this is all part of an absurdly elaborate "Screw you" to Christopher Eccleston, fear not — the rumor claims that, as Hurt emerges as the forgotten 9th Doctor, Eccleston becomes the 10th, David Tennant the 11th, and Matt Smith the 12th. While I can kind of imagine Steven Moffat doing something like that, if only to piss off insane fans like myself with retroactive renumbering, it's worth stressing that there's no clear source for this rumor at present, and even if there were, it would still be wise to take it with a grain of salt. 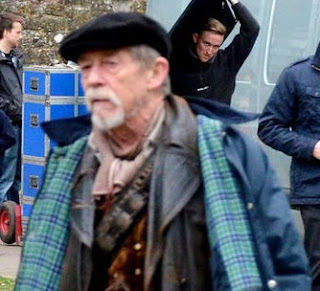 JOHN HURT ON THE SET
THE TRUE 9th DOCTOR?

Personally, I'll probably be happy with whatever story we get, in large part due to John Hurt and Joanne Page taking part, not to mention the returns of David Tennant and Billie Piper.

But I think that if this rumor has legs, then I can see why Moffat came up with it.....

It's been long established that Time Lords can only regenerate twelve times, leaving them with thirteen incarnations.  But in 'The Sarah Jane Adventures', the 11th incarnation of the Doctor told Clyde that he could regenerate 507 times.  I think this was just the Doctor's way of getting Clyde to shut up and stop asking questions.

But it must have been something the 9th incarnation of the Doctor has wondered about ever since he absorbed the time stream out of Rose, triggering his regeneration into the 10th incarnation.  Did all of that excess temporal energy "renew" him?  Could he regenerate now beyond the established limit of thirteen lives?

And now this is where showrunner Steven Moffat comes in.....

The Grand Moff must know that Matt Smith will want to leave the show for new projects, although Smith has stated he'll be with the program at least through 2014.  But when he does leave, it will most likely be on Moffat's watch as the caretaker for the series.

Moffat himself has said that the work has been overwhelming and that one day he too would hand over the reigns to a new showrunner.  But the chance to oversee the transition of the Doctor's role from one actor to another is probably too tempting to resist; he would probably stay with the show long enough to see that through. 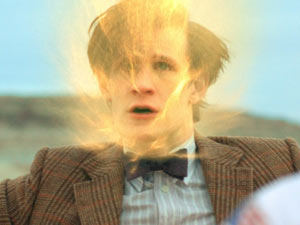 And what if he wanted to stay longer, to get the new Doctor off to a rousing start?  First and foremost, I think he would want to have one hell of a storyline - not just for the fans, but mostly for himself, to keep his interest in the series vested.

Currently, he's running an arc on the series which provides a new facet to the "new Companion" trope - rather than the newbie exploring the mystery of the Doctor anew (for the sake of new viewers, keeping it fresh), the Companion herself is the mystery.  The Doctor is desperately trying to learn the truth behind the various incarnations of Clara whom he's met so far..., two of whom have died.

So if Moffat wants to recharge his enthusiasm batteries with a storyline about a new incarnation of the Doctor, it will have to be really off the wall.  And this is why I think the re-ordering of the sequence of incarnations for the Doctor will be needed.

Technically, there's nothing inherently interesting about the penultimate Doctor; just another in a long line, with only variations on wardrobe and personality quirks to change it up.

Not so with the Thirteenth Doctor.  The Doctor wouldn't know whether or not this was his last opportunity at Life, the Universe, and Everything.  He's always labored under the assumption that it was thirteen chances and then you're out of the Living Time Lords club.

So now here he would be in his thirteenth incarnation, and I would imagine it would affect him deeply - perhaps it would leave him skittish about getting involved in death-defying challenges to save the Universe if it meant he could permanently die this time.

There's a major theme right there - how would the Doctor fight this fear?  Would he fight it?  Or would we see him mostly trying to avoid any such confrontation?

(A good role model for this version of the Doctor would be Bret Maverick, who would do whatever it took to get out of a difficult situation, usually by talking or conning his way free.)

So by bumping up the numerical sequence of the Doctors by adding in John Hurt as the new Number 9, that would make Matt Smith the penultimate Doctor and thus give Moffat something new and interesting to play with in shaping the newest and perhaps last incarnation.

Here's another possibility - if it turns out that the residue energy from absorbing the time stream has given the Doctor unlimited regenerations, it would serve as a good reason for bringing back the Master on a recurring basis.  Up until now, it's always been about the Master trying to kill the Doctor just for the sake of doing so.  There have been hints that there could be a familial bond between them, some aggrieved slight from back in their school days, but mostly it was just a matter of the Master wanting the bragging rights that he killed the Doctor.

But if he got wind of the Doctor's unlimited power source when it comes to regeneration, then he would definitely want that for himself.  He's side-stepped the ultimate fate too many times now and has probably run out of options to keep himself going.  He would want to take that power away from the Doctor, so there's the new rationale for hunting down the Doctor to kill him.

But again, this is all speculation.  We'll just have to wait and view to see what the 50th anniversary special has in store for us.....

I just hope the inclusion of John Hurt would mean we would at least get a flashback to how he regnerated from Paul McGann's too brief tenure as the Eighth incarnation.  McGann deserves at least that...... 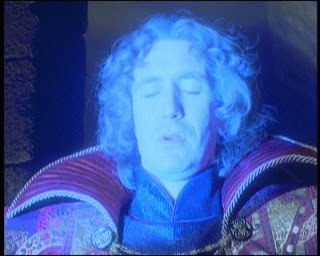