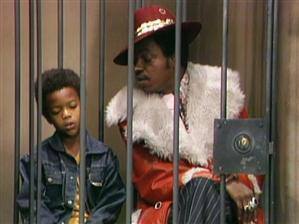 On April 14, 1975, eight-year old Truman Jackson tried to rob Liz Miller, the wife of police captain 'Barney Miller'.  She disarmed him of his stick and made a citizen's arrest.  At the 12th Precinct station, the detectives attempted to scare him straight by locking him up in their cell with a murderous pimp (who agreed to play along.)  By the end of the episode, they took him home to his grandparents.

But the thing is, in the Toobworld Dynamic, that kid didn't learn anything.  He lied his way right through to the end.

First off (according to our speculations), his name wasn't Truman, but he was a Jackson.

Played by Todd Bridges, I'm saying he was Willis Jackson, whom we would later "meet" in 'Diff'rent Strokes'.

And he lied about his mother being dead (or at least he said he had no mother.)  But three years later, Mrs. Jackson would be dead and Willis, along with his younger brother Arnold, would be adopted by their mother's boss Philip Drummond.

As for the grandparents?  During that three year period they also died, leaving the field clear for Drummond to adopt the boys.

So why did he choose the name Truman Jackson?  It may have been his father's name.  (And I don't think we ever learned if he was dead or just "missing in action".)

Going back to the mention of his grandparents, I'm wondering if Mr. Drummond and his housekeeper Mrs. Garrett passed themselves off as the white grandparents of "Truman" Jackson?

But that would just make it all a bit more complicated than it needs to be.

Labels: As Seen On TV, By Any Other Name, Game of the Name, Missing Links, O'Bservations, Tele-Folks Directory, Theories of Relateeveety, TV Classique, TV timeline, Wish-Craft