Here's a quote from Mark Twain that made me think of 'Warehouse 13':

"...a family brought love, and distributed it among many objects, and intensified it, and this engendered wearing cares and anxieties, and when the objects suffered or died the miseries and anxieties multiplied and broke the heart and shortened life..."- No. 44, The Mysterious Stranger 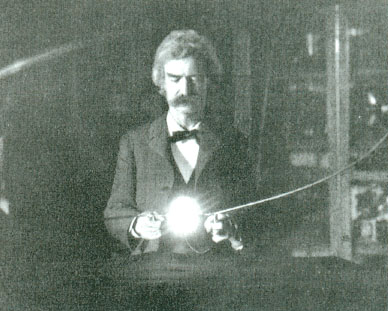 Mark Twain and one of the Tesla artifacts?


It has also been suggested that Samuel Clemens' encounter with Data in the San Francisco of the 1890s was an inspiration for one of the characters in that story.


So there yuh go, Fanficcers! How about a story in which Mark Twain had dealings with Warehouse 12?   Why not?  With 'Warehouse 13' sadly come to a close, it's not like we're ever going to see new episodes from Toobworld!

Maybe Mark Twain met the Warehouse agent who claimed to be H.G. Wells, despite her overwhelming feminine pulchritude......