LEAGUE OF THEMSELVES - TOM SEAVER


Yesterday the 80th MLB All-Star Game was held at Citifield in Queens, NY.  And to celebrate the history of the home stadium's team, "Tom Terrific" Seaver threw out the ceremonial first pitch.

I don't know why more TV shows didn't take advantage of his presence as a member of The League of Themselves once he retired.  His only fictional televersion showed up in the Skitlandia dimension...... 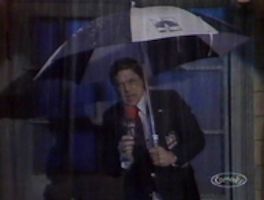 Tom Seaver:
Well, we're here at 'Saturday Night Live', and, as you can, seem it's coming down pretty hard here. You know, it's been raining all day, it's really a mess out there. There's umpire Ron Luciano, he's checking the stage. He doesn't look very happy - of course not. He's the guy who's gonna have the final decision on whether or not to cancel the show tonight. Boy, this is really a shame.

I'm Tom Seaver. You know, 'Saturday Night Live' has been on the air for nine years now, and, to the best of my knowledge, this would be the very first time they've been cancelled because of rain. And what a shame that would be. We have a capacity crowd here tonight, and they would really be disappointed. Many of them have been waiting all day long - some of them sleeping outside in sleeping bags so they could get tickets.

And, wait a minute, we've got a biggie now. Just in case the show is cancelled, NBC does have "Abbot & Costello Meet Frankenstein". We've got that standing by. I think Bela Lugosi's in that one, too.

You can see a few of the members of the cast here on the stage. Timmy up there, and Mary Gross. The Belush-man, Jim Belushi, up at the top. I know these kids would love to get this game in the show, and they're really gamers. They're troopers, the show must go on, and that's what they really believe.