LEAGUE OF THEMSELVES - LUC ROBITAILLE

It's supposed to hit 97 degrees here in New York City today, and continue like that for the rest of the week!  So I thought we could do with a little time on the ice.... 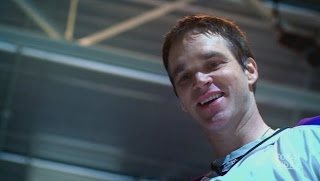 SYNOPSIS:
During a hockey game, FBI agent Seeley Booth suffers a concussion.  While he is unconscious, he is visited by hockey player Robitaille who offers him key clues in his current investigation. 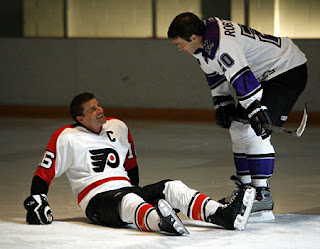 From Wikipedia:
Luc Jean-Marie Robitaille (born February 17, 1966) is a retired Canadian professional ice hockey player, and currently serves as President of business operations for the Los Angeles Kings of the National Hockey League.

During his 19-season National Hockey League (NHL) career, Robitaille won the Stanley Cup in 2001–02 with the Detroit Red Wings, and played for the Pittsburgh Penguins and New York Rangers, but is most known for his fourteen seasons, over three different stints, with the Kings. He served as Kings team captain during the1992–93 (while Wayne Gretzky was injured) and for the final two games of the 2005–06 season. Robitaille retired after the 2005–06 season as the highest-scoring left winger in NHL history and the holder of several Kings franchise records, along with numerous Kings playoff records.