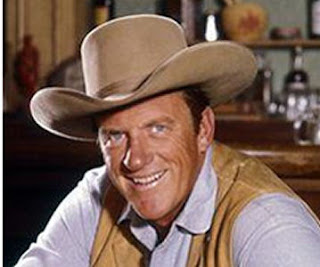 Unfortunate news this year dictated the choice for the TV Western induction into the TV Crossover Hall of Fame. A true giant among TV legends, both literally and figuratively, passed away a few months ago - James Arness, who starred for twenty seasons as Marshal Matt Dillon in 635 episodes of 'Gunsmoke', a record that will probably never be broken.

(Dr. Frasier Crane was seen on TV for 20 seasons, but in two consecutive TV series - 'Cheers' and 'Frasier', with additional appearances in episodes of 'Wings', 'Caroline In The City', and a Dr. Pepper blipvert. But nothing coming close to the number of episodes Arness garnered.)

Surprisingly, 'Gunsmoke' launched only one spin-off, 'Dirty Sally', although a lot of characters passed through Dodge who could have headlined their own series. And CBS never picked up on the idea to cross Matt Dillon over to their other TV Westerns which might have benefited from the publicity boost.

At least, not until long after the series ended, and even then Arness' participation was outside his control. AS part of their celebration of fifty years on the air, (TV-wise), CBS had the producers for some of their then-current hit shows digitally insert classic TV characters into scenes with the new stars. Some were seen as dreams or fantasies; others had to be regarded as ghosts, time travelers or electro-magnetic vibratory feed-back. But Marshal Matt Dillon has to be considered as actually being present in the saloon as he passed through Colorado Springs, Colorado, on his way back to Dodge City.

Sadly, because of the rights involved, these inserts had to be excised before the first repeats, and they don't show up in syndication or on the DVD collections. Even so, Matt Dillon did show up in an episode of 'Dr. Quinn, Medicine Woman', and that stands as a qualification for entry into the Hall.

James Arness also played Matt Dillon in a series of TV movies in the 1990's; each of which stands apart from the main series of 'Gunsmoke' as a qualification.

So Matt Dillon more than meets the requirements for TVXOHOF entry.

Matt Dillon is also a multi-versal, beginning life as a radio character voiced by William Conrad. There are comic books as well based on the characters from the TV show, and perhaps even novelization tie-ins to boot.

And then there's his presence on the big screen in "Alias Jesse James" starring Bob Hope. Marshal Dillon, along with other TV cowpokes, surreptitiously came to the rescue near the end of the movie.

As I said, James Arness is a TV giant and Matt Dillon is a towering legend in the tele-folks pantheon. This induction into the TV Crossover Hall Of Fame is just a small testament to the legacy he left us.

A tip of the Stetson to you, Sir.

Very good... I was too young to watch the show when it aired first run. Though I do recall being up late one night for some reason and watching an episode where Doc had been on a jury that found a man guilty, and he was killing off the jurors, and coming for Doc...and they did something I don't quite recall with his chair to save Doc's life.

I did get to see the Return to Dodge tv film, and it was great. But, sadly, I think they should have used the other characters from Gunsmoke--Festus, Quint, Newly, Doc, Chester, Kitty--in all of the films as they contributed almost as much as did Matt to the show, not just the first.

Arness as Matt Dillon didn't cross over into other series, but ABC's Maverick did 4 episodes spoofing Gunsmoke. The most notable of these was the episode "Gunshy". Furthermore, Chuck Connors did a Gunsmoke episode titled "The Preacher" in which a climactic fight took place between the 6'6" Connors and the 6'7" Arness. That must have been the tallest fight in television history!