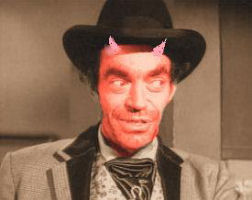 Character actor Jack Elam was right at home in 'The Rifleman', at home in fact in every TV Western and cowboy movie that he ever made during his career, both dramatic and comedic.

With our showcase series this year, Elam appeared in five episodes - and all as different characters.

Sim Groder, Gavin Martin, Gates, Gus Smith, and Russell..... It would be hard to believe that the townsfolk of North Fork, New Mexico, never noticed the intense similarities between these five men, especially with those popping lazy eyes they all sported. And yet that seems to be the case, so maybe it was because the people of North Fork, only human (for the most part), couldn't see the resemblance as the audience of the Trueniverse could.

I think they all looked alike because they were all the same "man", and a little deterrent like two of them getting shot to death doesn't detract from the theory.

No, I'm not succumbing to the temptation to use the 'Quantum Leap' time traveler theory with this guy. Not for him, anyhoo. I'm drawing my temptation from shows like 'Millenium', 'Supernatural', and 'Buffy, The Vampire Slayer'. 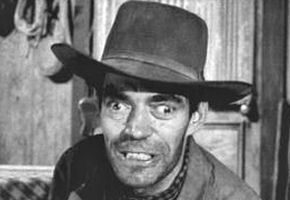 I mean - look at the face of Gavin Martin from the episode "Tension". How could such bestial rage emanate from a mere human?

The great thing about each of Jack Elam's appearances on 'The Rifleman', he played a character who seemed to have a vested interest in leading other characters into temptation.

Sim Groder of "Duel Of Honor" - He tried to goad the Italian count into a fight, but when Count di Montova proposed using his personal dueling pistols, Sim Groder turned yeller and skedaddled.

I would have thought a demon wouldn't have feared being killed by a normal human being. So I googled "How to kill a demon" and found this:

The Demons that are most difficult to kill however are pure-blooded, with inheritance from the fallen Angels. So far no one has managed to kill a fallen Archangel, although God once sent an army of Angels to defeat Lucifer. This was a mistake and God never tried it again, since Lucifer – the Devil – obliterated the army with the help of only three other Demons – all of them former Archangels.

A higher Demon can only be killed by the blade of a blessed sword – an Archangel's sword. Either the Demon's head has to be chopped off or its heart pierced.
[Click here for similar information.] 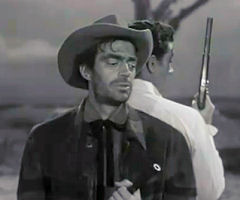 So I'm thinking this wild-eyed demon realized that the Count's bullets were melted down from an Archangel's sword; perhaps he could sniff that out. And then he might have realized that Count di Montova wasn't some ordinary human either.......
It's pozz'ble, just pozz'ble, that the Count was a vampire on the hunt through the American Southwest for demons. (How could a vampire survive in the harsh sunlight of the American Southwest? By keeping in contact with the dirt from his own grave in his shoes.)
Or even better, perhaps he was a fallen Archangel....
Gavin Martin of "Tension" (see above) - This is one of the two Jack Elam characters to die on 'The Rifleman'. I think that - unbeknownst to his father, Ezra Martin - the real Gavin Martin was already dead back where they lived. The demon probably goaded him into taking his own life. Ezra Martin would most likely find the decomposing body hanging from the rafter in the barn once he got home - if he didn't die from fright on the trail once the demon "rose" from the dead after being impaled on a pitchfork.
Gates of "Knight Errant" - As the "esquire" to Don Chimera Del Laredo, the demon tried to entice a fellow named Scoobo into fixing a chess match so that it would escalate into a duel in which someone would surely die. (With a name like that, Scoobo may have been a demon as well, and both of them were working opposite sides of the board.) 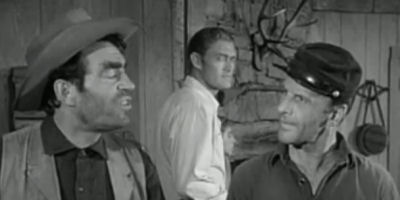 But eventually, the demon got so caught up in the epic match that he cheated as well to make sure his human would win.

Gus Smith of "Shotgun Man" - Demons aren't always successful when coaxing a human to stray into sin.  In trying to goad Mr. Beaumont, Smith ended up eating lead at the hands of the old and nearly blind shotgun man. 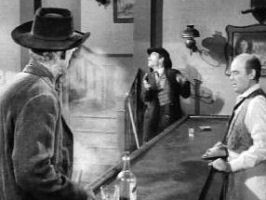 He needn't have bothered with the old man - Johnny Beau was already on his own road to Hell.

More than likely the demon's body was then carted off to the undertaker's, where - when it was dark, - "Gus Smith" got up and left the funeral home. That must have caused quite a stir in North Fork - but which remains unseen by the TV Audience.

Russell of "The Shattered Idol" - Deep in his melancholic madness over the death of his son, even though it happened ten years before, I think Mark Twain was able to see Russell for who he really was. I don't know if it was ever mentioned in 'Quantum Leap' that a genius would be among the few who could see through the aura guise of a leaper, but they could see through the falsehood of psychic paper on 'Doctor Who'.)

But instead of being afraid, the author faced down not only this demon in a game of billiards, but his own personal demons as well. Years later the experience may have been the inspiration for a story called "The Mysterious Stranger", a novel which Twain was never able to finish. (The demon probably saw to that.....) 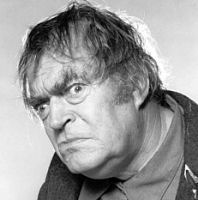 Having connected all of these Jack Elam characters together as one, the temptation is to go on to several other TV Westerns and make the same claim for the characters played by Elam on those shows. However, I don't want to dilute this 'Rifleman' showcase - and besides, I just don't have the time to do the research.
But at least one of his TV Western character roles in those other shows, one that died within the span of an episode, was likely the corpse used by one of the Dr. Frankensteins to be found in the TV Universe. Dr. Frankenstein used that corpse to recreate a human life... which became the caretaker of a Maine property in the sitcom "Struck By Lightning".
Having presented my theory that all of Jack Elam's characters in 'The Rifleman' were the same demon, can the case be then made for that same demon to be from some other TV series that naturally contained demons? I think not. I think Elam's demon has to be a TV character found only here in Inner Toob, skating just shy of fanfic.

So who would this demon be; what was his name?

There have been some interesting names for demons in other TV shows over the years. In my favorite 'Millenium" episode, the four old guys in the donut shop were all demons in disguise named Abum, Blurk, Greb, and Toby (my favorite of the bunch for some reason.....)

And then there's Clem from 'Buffy The Vampire Slayer'. Like the Jack Elam character, Clem has since assumed human form and is living in a cul de sac in West Gulfport, Florida, by the name of Tom.

I gave it a little thought (Some might say, based on my past record for research, "very little".), and decided that the name of this demon would be the perfect opportunity to pay tribute to this wonderful character actor who is sorely missed in this day and age.

Why not name him Elam?

The Hebrew meaning of the name Elam is "Forever". The root is 'alam III, which gives us the word olam, meaning forever, ever, everlasting. According to HAW Theological Wordbook of the Old Testament, twenty instances of this word's more than three hundred occurrences in the Bible denote a very long but not limitless past.

Thus it's an apt name for this particular demon...... 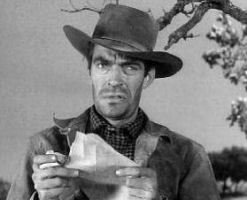 (I think the demon Elam looks upset about the fine print in that contract for a soul....)
BCnU!
Posted by Toby O'B at 9:34 AM

Labels: By Any Other Name, Game of the Name, Life During Prime-Time, Missing Links, O'Bservations, Splainin 2 Do, Tele-Folks Directory, TV Classique, Westview

This was a great idea, and totally works for me. I've loved Elam since I was a boy, he's one of my favorite character actors. My goodness, you remember Struck By Lightning too? I just barely recall it, but I watched it BECAUSE Jack Elam was in it!

Jack also played a Western-type character in a Fantasy Island episode, The Lady and the Longhorn, a rancher opposite Zsa Zsa (or was it Ava?), who was a wonderful distillation of all his fun Western characters over the years (albeit contemporary to the episode). Really underrated actor.