"THE RIFLEMAN" - A COUPLE OF CHUBBIES

'THE RIFLEMAN'
"The Horse-Traders"
Lucas and Mark travel to North Fork after they hear a horse trader is in town, and Mark learns a few things about horse trading.

"The Spoiler"
A good friend of Mark’s is murdered by an escaped murderer. Mark discovers the man at the home of an elderly couple and is forced to keep the secret from his father.
From "The Rifleman Episode Guide List"

These two episodes were broadcast one after the other in succeeding weeks, and unsung character actor Chubby Johnson appeared in both. However in the first episode he was known as Kansas Sawyer, but by next week he was Mr. Avery. 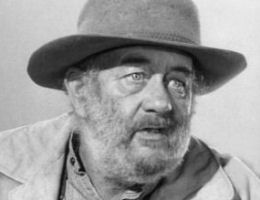 I think this should be a simple splainin - he and his wife had moved around the West several times to escape their past as the parents of a murderous scum named Brud Evans. Once he and his wife moved into the North Fork area as Mr. and Mrs. Avery, he must have let it slip one night in Sweeney's saloon that his name was Kansas Sawyer (a name he probably used in the last town where they lived.) He laughed it off then and claimed that was his gunfighter's name; perhaps he even told them that his full name was Avery Sawyer and that Kansas was his nickname. (If I remember correctly we never do learn what the Averys' first names were.)

That should work fine when it comes to the names. Where the trick lies in in the fact that Chubby Johnson's wife in the first episode was played by Fern Berry, but she was played by Ellen Corby in the second one.

I can only assume that some form of frontier plastic surgery was performed on her to improve her looks. Or she was just tired and run down with iron poor blood when first we met her.

Or maybe a neighboring witch cast a spell to change her appearance (as was done to Gladys Kravitz and Darrin Stephens in 'Bewitched!)

Labels: By Any Other Name, Double Vision, Game of the Name, Splainin 2 Do, Tele-Folks Directory, TV Classique, Westview

If they'd done it right with the airing by showing them a few months apart, we could not only use your name theory of Avery Sawyer (another good 'un!), but that wife #1 died and he married #2, who was a widow.

Back to back... hmmm... actually, one's a sister, maybe? Or the widow of his brother, who is staying with him?

Oh, wait, what if Avery Sawyer is a MORMON! This is after the LDS folks moved to the Salt Lake City area in 1847, so maybe your theory about being the father of Brud Evans works: the good folks of Salt Lake City still practiced polygamy at this point in time, so he could have two wives and been wandering around to avoid the stigma of being the parents of Evans.

You could use either of these theories, I guess. Definitely the Mormon theory can be used extensively; after all, they have sent a lot of people out into the surrounding Western states over the years, so it is quite likely we'll find a lot of similar situations you can use this excuse for. :)