'THE RIFLEMAN'"Miss Bertie"
A lively old lady arrives in North Fork to capture a notorious criminal and collect the reward which she desperately needs.
From "The Rifleman Episode Guide List"

Alberta Hoakam of Philadelphia was probably not the only member of her family to travel out West.....

Miss Bertie may have been the maiden aunt of Emma Valentine, the villainess matchmaker seen in "The Night Of The Vicious Valentine", an episode of 'The Wild, Wild West'.

(As you can see from the pictures, Agnes Moorehead played both roles.) 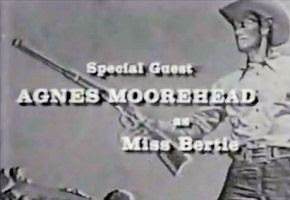 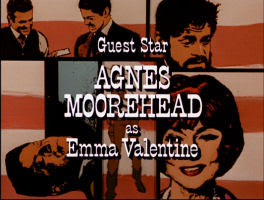 About ten years separate the characters, with Miss Valentine appearing first on the Toobworld timeline.

The last name of "Valentine" may have been an alias (Emma Hoakam not having the required ring to it that her matchmaking enterprise needed.) Or it could be that Emma had once been married to a man named Valentine back East. If so, she could be the grand-mother of a New York criminal named Rocky Valentine, who found "A Nice Place To Visit" in 'The Twilight Zone'.....

O'Bviously neither woman could be related to Agnes Moorehead's character in her T-Zone episode, "The Invaders"......

Wow, the makeup on Ms. Moorehead in Miss Bertie is remarkable--I can just just just barely tell its her!

Certainly is interesting that even though Valentine appears ten years earlier and was filmed 5 years later, I think Hoakam looks 20 years older.

In between filming these, Ms. Moorehead did a comedy with Jerry Lewis, "Who's Minding the Store?" She plays a tough b-word who is the power behind Mr. Tuttle of Tuttle's Department Store in New York. Her daughter is Jill St. John, who is in love with ne'er-do-well Jerry Lewis. Ray Walston is the manager. Mrs. Tuttle does seem to have a lot of persnality elements that Miss Bertie and Miss Valentine have. Likely Mrs. Tuttle is part of the family, too.

O'Bviously none of them are related to Endora, either, despite similar personality traits. Ms. Moorehead certainly was given a lot of similar roles!