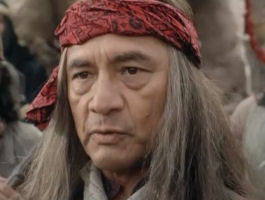 GERONIMO
AS SEEN IN:
"Gunsmoke: The Last Apache"

AS PLAYED BY:
Joaquin Martinez

From Wikipedia:
Geronimo ("one who yawns"; June 16, 1829 – February 17, 1909) was a prominent Native American leader of the Chiricahua Apache who fought against Mexico and the United States for their expansion into Apache tribal lands for several decades during the Apache Wars. Allegedly, "Geronimo" was the name given to him during a Mexican incident. His Chiricahua name is often rendered as Goyathlay or Goyahkla in English.

In 1886 Geronimo surrendered to U.S. authorities after a lengthy pursuit. As a prisoner of war in old age he became a celebrity and appeared in fairs but was never allowed to return to the land of his birth. He later regretted his surrender and claimed the conditions he made had been ignored. Geronimo died in 1909 after being thrown from his horse.

How did you decide to choose this performer as Geronimo? There were earlier appearances of him on television.

For example, there were three appearances of Geronimo on Rin Tin Tin http://www.imdb.com/character/ch0197324/ including two by the same performer, a Charles Stevens, one in the first episode.

This search I did http://www.imdb.com/character/ch0043837/ brought up a bunch of film appearances as well as television. Chief Thundercloud and Jay 'Tonto' Silverheels played him thrice each. Thundercloud's appearances include a tv version in Buffalo Bill, Jr. There were also three tv appearances by Pat Hogan during the Texas John Slaughter stories on The Wonderful World of Disney.

1) It was an easy frame grab. That "Gunsmoke" movie is available on streaming Netflix.

2) I had half an hour in which to put it all together before I had to leave for work.....