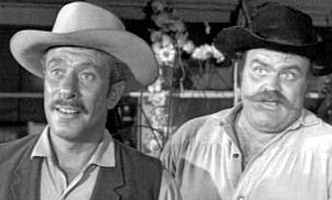 'THE RIFLEMAN'
"The Sister"
Mark tries to set Lucas up with a pretty young woman he thinks would make a perfect wife for his Pa. Lucas soon finds himself contending with the two brothers of this young woman as well as some outlaws bent on killing him.
From "The Rifleman Episode Guide"

The strength of tele-genetics is not always a given; just because two characters look alike (due to the real world splainin of the same actor playing both roles), that doesn't mean that they have to be related.

I stated in a post a few days ago that Little Joe Cartwright and Will Fulton/Billy Mathis were father and son (although they never knew it), but that doesn't mean Hoss had to be the father of Peter Snipe from this episode of 'The Rifleman', even though Dan Blocker played both roles.

But Peter Snipe and Hoss Cartwright still could have been related. It's always pozz'ble, just pozz'ble, that the mother of Joshua, Rebecca, and Rhoda Snipe might have cheated on her husband with Gunnar Borgstrom, the brother of Ben Cartwright's second wife (as seen in the 'Bonanza' episode "The Last Viking".)﻿
﻿To me, it makes sense that the physical characteristics which made Hoss and Peter so... notable... would be passed down from all members of the Borgstrom family.

Also, Joshua Snipe may have gone on to become a Jesse James impersonator - not for any Wild West show, but to pursue a criminal career. (Why? Because that Jesse James who encountered the Martian Exigius 12½ in an episode of 'My Favorite Martian' in no way could have been the real deal! Especially since he was older than his "brother" Frank, also an imposter, when it should have been the other way around.)
BCnU! 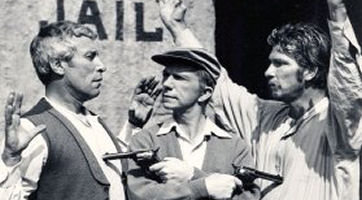 I should also point out that there is Wold Newtonish precedent for this. Nero Wolfe is considered to be the son of Sherlock Holmes, even though his hefty bulk is more reminiscent of Sherlock's older brother Mycroft.

Agreed with the likelihood of the characters being related. Another WN article, while talking about Aquaman (or the Sub-Mariner), postulated that the Man From Atlantis, Mark Harris, had as his father Jock Ewing, since Mark looks like Bobby Ewing--both played by Patrick Duffy. And since Jock had at least one other son by another woman, Ray Krebbs, why not more? Why not Mark?

Of course, that implies that Sam Beckett could be the great-great-great grandfather of Jonathan Archer, and another family includes Luke Macahan, Frank Buck, Billy Montana, Lee Stetson, Alan Bradley, John Sheridan...well, it can go too far :)

But speaking of Boxleitner, he played a character named Richie Danko in a tv-movie called A Cry For Help. This, and finding a few other Dankos at IMDB, annoys me, because I postulated that the real name of Mike Danko from The Rookies was Duncan, and that he was the brother of Bill Duncan, who was Sabrina's ex-husband (seen twice on Charlie's Angels). Rather than accounting for the two Kate Jackson characters looking alike, I had her characters' husbands being brothers. But since there was a Lt. Danko in the Dirty Dozen tv series I might have to change that...as well as a Danko in Heroes. And Ahnold the Governator played Capt. Ivan Danko in Red Heat, so the family name is Russian.

I wanted Mike and Bill to be brothers, to explain their taste in marrying women who looked alike. I could not conflate Jill Danko the nurse with Sabrina Blaylock the police academy cadet who married Bill, since Sabrina was at the academy at the same time Jill was a nurse and married to Mike. Otherwise, I'd have to go and make Jill an unknown twin or half sister to Sabrina--or that Bill changed his name so as to not be compared with his brother (who might actually be younger). Anyway, I know The Rookies are connected to Angels because Angels used an establishing shot of the Academy in both shows (the same shot), where Jill and Sabrina and Kelly were cadets as well as the Rookies, and also used in TJ Hooker, where Adrian Romano and Stacy Sheridan were graduates as well, so the shows are all connected. I'm sure you've seen my Angels TVCU blog.

Boxleitner also played a character in a tv miniseries called The Last Convertible named George Virdon. I have not been able to find out more info on his character, since the novel by Anton Myrer and the miniseries take place from the 40s to the 60s. I think that George is probably either the father or uncle to Alan Virdon, from Planet of the Apes. If so, there's another backstage-connection, because the author wrote another book made into a film costarring one of the actors from the third Apes film, Bradford Dillman.

Relateeveety is so much fun! Thanks for sharing it with us!

That is, Alan Virdon from the Planet of the Apes tv series.

You know, not all Dankos have to be related. I let a lot of theories of relateeveety slip by because after awhile it might be too unbelievable.