Speaking of TV superheroes, here's a recent blipvert from DirecTV:

I think that may be the same big City which was home for the superheroes Bat Manuel, Captain Liberty, the Tick, and Arthur as the Moth, as seen in the TV series 'The Tick'.

I'm not sure what happened to that quartet which would be keeping them from saving the City from such villainous scum, but they certainly don't appear in this commercial. Perhaps they had already been captured?

At any rate, the City is doomed because this guy has DirecTV. Thanks a lot, DirecTV! 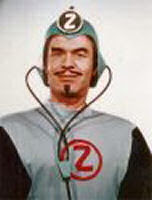 But who is he, exactly?

I'm guessing, based on his emblem, that his name begins with an "O" - Omni-Man? Obsidian? Obelisk? No, they're already established in the comics. Omega Man? No, that's the name of a Charlton Heston movie. Captain Olfactory? Gus on 'Psych' already has a super-sniffer. What if it's a zero? It can't be Captain Z-Ro, however - that Time Lord had a totally different look back in the 1950's. (Perhaps it could be his grandson?)
The Oligarch? It has pozz'bilities, and Glenn Beck would hate it! (Mostly because it would be a reminder that he doesn't know how to spell the word.) 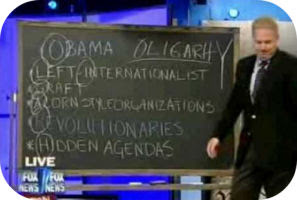 Well, whoever he is, and however this turned out, I'm going to link it to 'The Tick' for the time being......

Labels: As Seen On TV, Blipverts, By Any Other Name, Game of the Name, League of Themselves, Outside the Box, Tele-Folks Directory