AS SEEN ON TV: PEE-WEE HERMAN

Pee-Wee Herman recently brought his Playhouse to Broadway, and it was recorded for broadcast on HBO. But here's how Pee-Wee looked in Skitlandia: 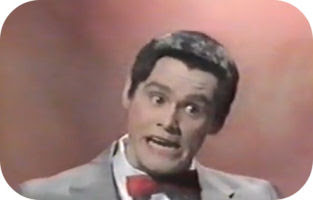 AS PLAYED BY:
Jim Carrey

And here's a bit of a tease preview for that Pee-Wee Herman on Broadway special which will be coming to HBO on March 19:

I think my Uncle Skippy went through that process everyday to choose the proper bow-tie.....