When I got home from work this morning, I checked out my DVR recording of the Sci-Fi broadcast of Catherine Tate's return to 'Doctor Who' - "Partners In Crime".

The real crime was in the cutting room!

Here's how my blogging buddy Joe B. describes it over at his site, "I Am A TV Junkie" (link to the left!):

Just know that it's a much better episode than you saw. It was ...... hacked to bits, more than likely by a twelve-year-old boy, and one that had never seen an episode of 'Doctor Who'.
Can we find out who's responsible and ... you know ... get all mad and stuff?
I guess we could not watch and wait for the DVDs or move or ...
... you know what I mean.
Not that I advocate that kind of thing, but what I'm watching here right now, it's criminal to cut the heart out of the story.
They cut out all the best Donna/Grandpa stuff. Now at the end when they do the Grandpa flyby it won't mean anything.
Does RTD get approval on this stuff? He should hold out for that next time he signs to do something, he has the clout. The show I'm watching now is considerably less desirable than the one that ran on BBC One.
That affects the US market's perception of the show and their perception of him in an increasingly global TV market which it can be argued affects his value in that market. It's not just a diva move, it's protecting yourself.
Sorry, it's just that they cut my favorite scene. 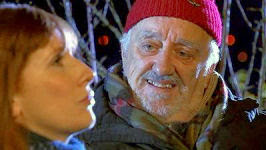 Well, I will advocate that sort of thing! Once again I feel compelled to speak up in support of bit torrent rebels. If you have access to the show via those means, then go see that episode again. That was a very touching scene between Donna Noble and Wilf Mott, her grandfather; probably the only good family scene RTD has been able to bring to the series.
And they shredded it to fit more commercials into the hour......
Of course, for Toobworld itself, it's the original broadcast that stands as the official "history", but it irks me that so many people in America couldn't get to see it.
BCnU!
Toby OB
Posted by Toby O'B at 5:19 PM