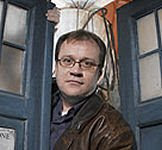 The Sunday Telegraph in Great Britain ran an "arts power list" in the paper a couple of weeks ago. Russell T. Davies, the writer of 'Queer As Folk' and "Casanova", was named number 42 on the list because he brought 'Doctor Who' back from the dead in 2005. (Well, he brought it back at least from Limbo. How could you actually kill such a fantastic concept for a show?)

In the article, the newspaper proclaimed Davies as "the saviour of Saturday night entertainment".
With this listing, RTD, who's in our Behind The Scenes wing at the TV Crossover Hall Of Fame as of last year, shows that "The Numbers" of 'Lost' can play a part in the real world - at least when it's in relation to Toobworld....
BCnU!
Toby OB
Posted by Toby O'B at 3:32 PM

Labels: Numbers Running, O'Bservations, Outside the Box, Tiddlywinkydinks, Who's On TV