SATURDAY COMICS - "RUN FOR YOUR LIFE", A WISH-CRAFT


We've got a very simple "Saturday Comics" this weekend.  It's a "What If?" situation with a touch of Wish-Craft. 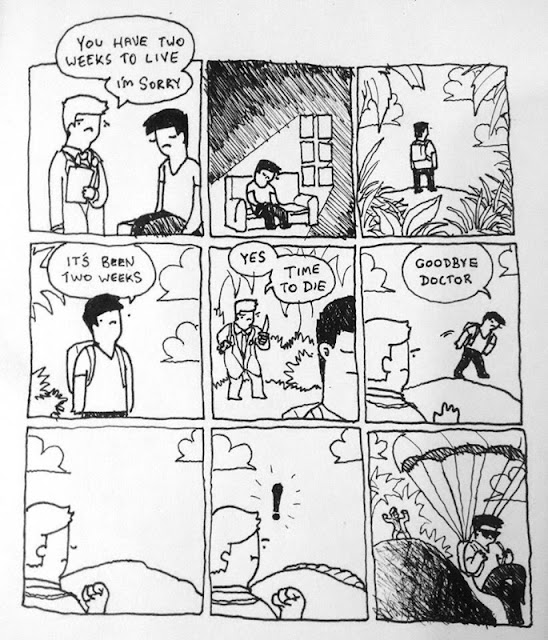 This is how Ben Gazzara's TV series "Run For Your Life" should have ended.

From Wikipedia:
'Run for Your Life' was an American television drama series starring Ben Gazzara as a man with only a short time to live. It ran on NBC from 1965 to 1968. The series was created by Roy Huggins, who had previously explored the "man on the move" concept with 'The Fugitive'.

[Bryan needed to have a disease that he would die from but which would not affect his quality of life otherwise. The disease selected was chronic myelocytic leukemia.]

His original doctor (seen in the pilot which aired in an anthology series, so Paul Bryan officially has two-thirds of the requirements for inclusion in the Television Crossover Hall of Fame) gave him only eighteen months to live.  But this new doctor saw Bryan near the end of that eighteen months* and obviously lied about  the fact that he was going to die in two weeks because he was a psychotic killer.

Whether Bryan still died from chronic myelocytic leukemia or not is unknown.

By the way, based on the cartoon figure, I think Jack Cassidy would have been the perfect guest star as the psycho doctor.

Thanks to my brother Bill for finding this.....

* The timeline for this show differed from the real world.  It took three TV seasons for that eighteen months to pass.

Labels: O'Bservations, Outside the Box, Wish-Craft