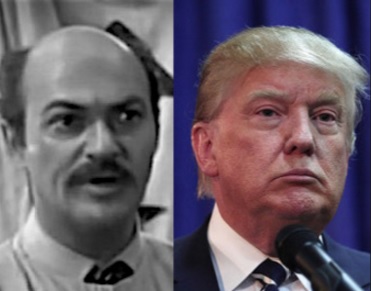 A few more days and a new era dawns in America.  Jack Lord help us.

Drumpf built his campaign on the promise that he would erect a wall between America and Mexico.  And topping that, he promised that Mexico would pay for the wall.

Only now he's saying the American taxpayer would pay for it now, but that Mexico will pay for it.... eventually.

This story has been going around - apparently there was an episode of 'Trackdown' in which a con man was offering to build a wall around a town to protect it from a meteor strike.  And his name?  Trump.

Okay, his first name was Walter and he didn't try to cover up his lack of hair with vermin fur, but it's a neat coincidence.

That great debunker of urban myths, Snopes.com, has the story.  Click here.
http://www.snopes.com/trackdown-trump-character-wall/

I would say that Walter Trump is the ancestor of Donald Trump's televersion (who is a member of the TVXOHOF) except his family only came to America a few generations ago.

Labels: Game of the Name, Life During Prime-Time, O'Bservations, Online TV, Outside the Box, Twipped from the Headlines, Westview, Wikipediaphile