GAME OF THE NAME - SEND IN THE CLOWNS 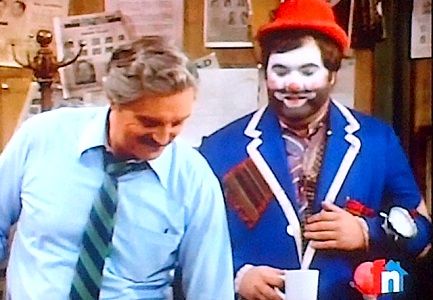 "Everybody loves a clown."
William Krebs
aka
Bingo the Clown
'BARNEY MILLER'

Bingo the Clown was entertaining the crowd outside the Tivoli Theater on Houston Street when he was mugged by repeat offender Arthur Duncan.  Duncan had switched to attacking street performers after ripping off the Salvation Army and assaulting the handicapped.  Before Bingo, Duncan had mugged three other clowns, a mime, a juggler, and a couple of one-man bands.  (After Bingo, Duncan also mugged a clown named Mr. Jingles.) 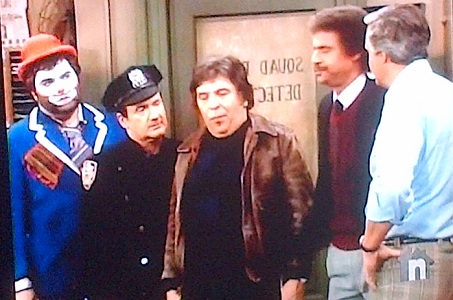 You guys know me. I can't just leave it at that.  I needed to fill in the blanks and find appropriate TV characters to be those three other clowns, the mime, the juggler, and the one-man bands.

HoHo the Clown
'Bewitched'
Episode: Hoho the Clown
(1967)
Darrin gets free tickets for Samantha and Tabatha to a live taping of "Hoho the Clown", Tabatha's favorite television show, as Solow Toys, the show's sponsor, is a client of Darrin's. Samantha and Darrin, who saw the show live on television as well, are unaware of is that Endora also put a spell on Hoho to make Tabatha the one and only person for whom he will do the show and direct his attention. So when Hoho pays all his attention to Tabatha at the next show, Samantha and Darrin have to get Endora both to remove the spell, and somehow overcome the inevitable problem of implied fraud when Solow finds out that Tabatha is Darrin's daughter. 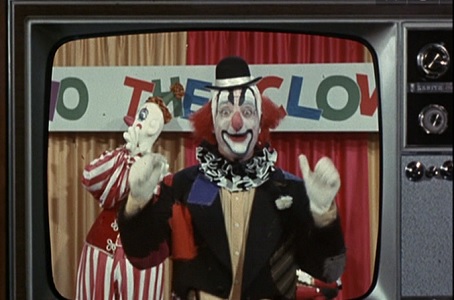 By the time Hoho the Clown was mugged by Duncan in 1982, the former star of his eponymous kids' show in New York City had fallen on hard times.  When the Solow Toy Company pulled their sponsorship of the afternoon program on WXIU, TV stations were finding it more cost effective to run syndicated reruns of shows like 'Mosquito Man' and 'Jed Clayton, US Marshal' rather than provide their own programming.  (And then when talk shows and reality programming took hold, fuhgeddaboutit!)  Because of the rumors of corruption due to the mess caused by Endora, Hoho found himself virtually blacklisted in the TV industry.  He was forced into competing in the cut-throat business of birthday party entertainment in the Big Apple.  And from there, he was reduced to becoming a down-and-out street performer.  And that's when Arthur Duncan struck. Mike Kelley had been kind of a mentor to Danny Williams when he ran away from home to join the circus at a young age.  By the time they were reunited, Mike and his fellow circus folk had fallen on hard times, but the Christmas performance in the Williams' living room did a lot to cheer them all up that holiday.  (O'BSERVATION: I think that IMDb summary is wrong.  I think the kids asked Mike to perform in order to cheer their father up.)  Thanks to the rekindling of his friendship with Danny Williams, things began to happen for Mike Kelley - there were nightclub gigs, tours with a few small circuses including a tour with Inky's carnival that took him to Hawai'i.  One person who was probably glad to see the upturn in Mike's fortunes was his identical cousin in Westport, Ct., who sometimes lent Mike money and let him stay at his house on Morning Glory Circle.  (Bad enough he had to share it year round with his nosy busybody of a wife!) 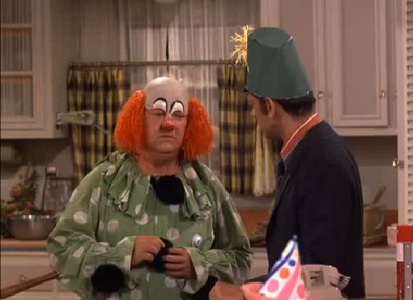 Sherman had quite an enterprise going in children's entertainment.  Business was so good he probably got the other clowns to work for him which helped to cut down on the rivalries.  But he also had a bad gambling habit which nearly brought him to ruin.  (Addictions ran strong in his family: he had an identical cousin down in North Carolina who had a very bad drinking problem.)  So by 1982, Sherman Enterprises had been reduced to just him, working whatever street corner or small city park that wasn't already claimed by one of his former proteges.

Sotto
'Cheers'
Episode: 2 Good 2 Be 4 Real
(1985)
Diane is taking a mime class and brings the resident mime, Sotto, into the bar to entertain the patrons. Diane is sure that Sam, who hates mimes as does everyone else in the bar, will love the art form by evening's end. Every single person in the bar does have the same attitude toward Sotto as Diane by the time that he is ready to leave at the end of the night.

"Sotto" was so traumatized and embittered by his experiences in New York City, he decided to move to Boston after being mugged by Duncan.  Unfortunately, the psychological damage from the mugging left him with PTJS - Post-Traumatic Jester Stress - which he then transferred to his audiences in Beantown.

Marko the Magnificent
'The Flying Nun'
Episode: Sister Socko in San Tanco
(1969)
Convent orphan Michael Antonio idolizes his uncle, renowned magician and juggler Marko the Magnificient. Marko is coming to San Tanco to visit Michael, an opportunity Sister Bertrille cannot let pass. Since the hot water pipes in the convent had just burst, she persuades the Reverend Mother to hold a benefit concert headlining Marko the Magnificent. The Reverend Mother thinks it's a good idea since she has seen the amazing feats of Marko. Marko however does not want to do it since he has come to San Tanco for some rest and personal time with Michael. Feeling pressured from Michael as well as some pre-publicity of the concert, Marko reluctantly concedes to doing it.  Sister Bertrille learns that Marko's reluctance masks the fact that his hands are afflicted with arthritis and he can no longer perform magic or juggle. Sister Bertrille comes up with a solution for Marko. They can create a magic act around levitating Sister Bertrille, who will be flying on her own. 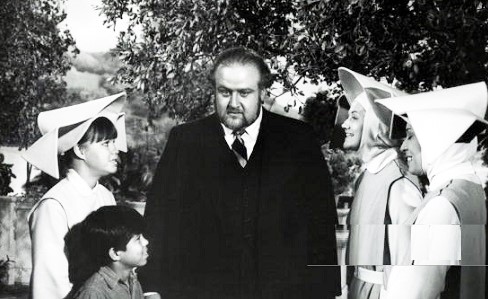 By 1982, Marko the Magnificent had long since retired and was only making special appearances on the nostalgia circuit, a few talk shows whose hosts had grown up idolizing the magician/juggler, and hosting himself at the few nightclubs which still booked magic acts.  Marko was on his way home from one of these gigs when he was attacked by Duncan.  (Theory of Relateeveety: Marko's full name might have been Marko Manzeppi.  If so, he might then have been descended from Count Manzeppi from a century previous who had been a master criminal in the wild, wild West.

A COUPLE OF ONE-MAN BANDS

Rory, The One Man Band Man
'Maude'
Episode: The Telethon
(1975)
Maude and the gang come together to perform in a telethon that Maude has organized. However, when she fails to come up with a celebrity to appear in the telethon she is left organizing a telethon without a cause, when the charity for which Maude has put in a lot of work withdraws at the last moment. As the minutes wind down, she must come up with a cause or face being taken off the air. 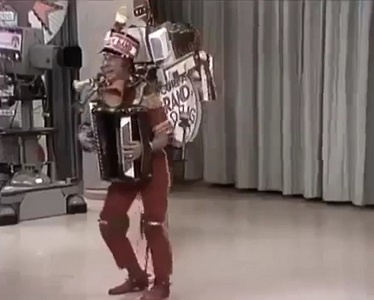 This was probably the One Man Band Man's only shot at TV "stardom", even if it was broadcast on Channel 72 to the viewing public in the Tuckahoe area.  Otherwise, he contented himself with supplementing his social security with street performances near City Hall on the weekends.  (It was a very patriotic act he performed.)  But the mugging cut short his musical ventures because the shock of the experience weakened his heart.  Thereafter he focused only on his job working for Walter Findlay.  (O'Bservation: Dick Winslow is only credited as "One-Man Band" in this episode.  But he would resurface again in a Christmas episode as Rory, one of Walter's employees.)

Jerry
'The Andy Griffith Show'
Episode: Banjo-Playing Deputy
(1965)
When Andy forces the harem dancer show at the carnival to shut down, the owner decides to move on but leaves his one-man band, Jerry, behind. Andy takes pity on the jobless and penniless young man and invites him home for dinner. With Barney away, Aunt Bee suggests to Andy that he should hire Jerry to do some general work around the courthouse. Andy decides to try him out, but the somewhat inept Jerry has ideas about being a Deputy that don't quite work out. When Aunt Bee has her purse snatched at the carnival however, Jerry knows exactly who did it and shows his mettle to get it back. 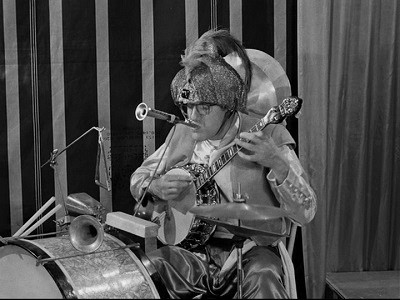 Jerry and Mayberry, North Carolina did not make a good fit, so he soon moved on until he finally gravitated to Manhattan and immersed himself into the counter-culture scene.  After getting mugged by Duncan, Jerry crossed the river and decided to try his luck along the boardwalk in Atlantic City.  At least there he felt at home among the oddities on the fringes of show business.

One last O'Bservation: I am tempted to induct Arthur Duncan into the Television Crossover Hall of Fame on the Birthday Honors List this June for this..... 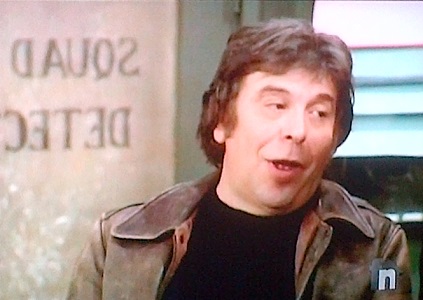 I've also got one more Theory of Relateeveety: The last street clown mugged by Duncan went by the nom de beauzoux "Mr, Jingles".  It could be that the inspiration for his moniker came from his great-grandfather, Jingles P. Jones.  Jones rode along with James Butler "Wild Bill" Hickock but unfortunately parted ways with the folk hero of the Old West before Hickock rode to Deadwood where he would meet his fate. 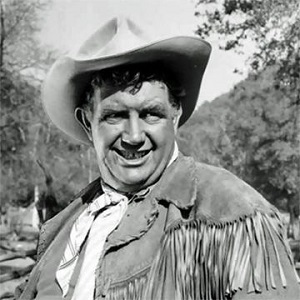 Here's another bit of Wish-Craft, a fanfic tidbit:

When he was 11 years old, somewhat-little Cameron Tucker was brought to NYC by his parents so that he could see his very first Broadway show (one starring Dick Burgess and Mary McKinnon.)  While they were down in the Village, Cam saw Bingo the Clown doing his routines on the street and right there on the spot, he decided he too wanted to become a clown. 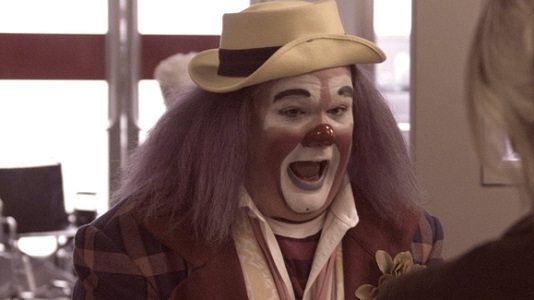 Remember, these are all just theories.  Should they be challenged, the Secretary will disavow any knowledge of my connections....