When Dr. Megan Hunt told Detective Tommy Sullivan that she believed an escaped convict was in search of the real killer of his lover, Tommy sarcastically asked if it had been committed by the one-armed man.

This was a reference to the killer of Dr. Richard Kimble's wife back in the 1960s, as seen in 'The Fugitive'.  For the people within the Toobworld reality, that was a true life crime that made headlines all across the country. 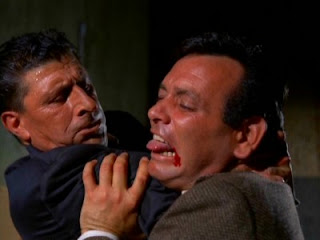 It proved to be so riveting that eventually a movie was made out of it, the same movie we saw in the real world theaters, the one starring Harrison Ford as Kimble.  (Liberties were taken with the details.)

So when references are made to 'The Fugitive', it could either be to the real life news event of Toobworld or to the movie made about the case.  But it would not be a Zonk about the TV series starring David Janssen.

If Janssen himself is ever mentioned in connection to the series, then it means the story of Dr. Kimble was previously made into a movie, perhaps a TV movie.

I think in this case, Tommy was referring to the actual crime, being a cop himself.