When Marc Maron found out that his estranged father had been selling questionable "vitamins" from his mobile home, he couldn't believe it.  "Who are you?" he asked. "Walter White?" 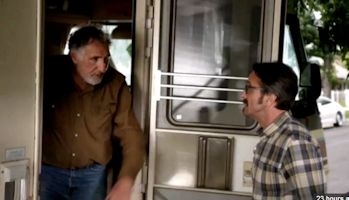 Walter White is the former high school science teacher who has become a meth maker and major distributor in the American Southwest, as seen in 'Breaking Bad'.  Right now, as far as we have seen on TV, he is not a household name.  So one would think that this is a Zonk reference to Walter White as a TV character when he should be sharing the same TV dimension as the televersion of the comic.
But the show will be ending this summer and who knows what that will bring?  Will Walter White be able to go to his grave "peacefully" and in anonymity with no one the wiser of his illegal activities?  Or will he die in a blaze of "in-glory"?  Perhaps he'll be arrested by his own brother-in-law, a DEA agent.
Either of those last two options could make his name known to anyone following the news, as Marc Maron would normally do to find fodder for his comedy act.
And it all comes down to the perception of Time in Toobworld.
The passage of time is fluid in TV with no two shows moving at the same rate.  'Lost' is a good example of this in that no more than 108 days at most passed in "real" time before they finally left the island.  And yet for us watching at home, it took about six years to see that happen.
A great example of time being different between the real world and Toobworld is the period between TV seasons.  That hiatus, usually over a summer break, is about two months long, maybe three.  And yet with shows ending on cliff-hangers which pick up  immediately after, no significant time has passed, mere moments at best.  (Many times, the real break occurs between that season premiere and the second episode as things get back to normal.  Usually.)
So let's say that time span is collapsed for 'Breaking Bad'.  And those weekly breaks between episodes could be collapsed as well.  That means when the storyline for 'Breaking Bad' concludes, it may have occurred already on the Toobworld timeline and not around the same time as when we see it happen.
Meanwhile, I've seen nothing so far to indicate that 'Maron' has to be taking place exactly at this time just because it's been broadcast.  We could be watching events unfold from the near future, just a few months away,
Combining the two, it could be that by the time Marc Maron accused his father of being a "Walter White", the storyline of 'Breaking Bad' has come to an end.
And therefore?  No Zonk.
But again, it all depends on whether or not Walter White could become a household name in the news by the end.....
BCnU!
Posted by Toby O'B at 1:00 AM