LEAGUE OF THEMSELVES - KATEE SACKHOFF 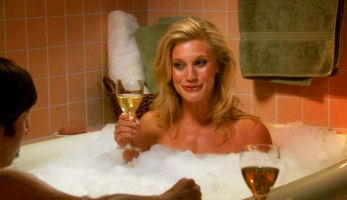 AS SEEN IN:
'The Big Bang Theory'
"The Vengeance Formulation"

SYNOPSIS:
When Howard Wolowitz was having relationship problems with Bernadette Rostenkowski, he sought advice from his fantasy figure, the star of 'Battlestar Galactica'.

O'BSERVATION:
In this case, 'Battlestar Galactica' is a fictionalized TV show within the main Toobworld.  It was created by the "UNReel" group to keep people from discovering that the Galacticans had actually arrived in the Sol system back in 1980.

From Wikipedia:
Kathryn Ann "Katee" Sackhoff (born April 8, 1980) is an American actress known mainly for playing Captain Kara "Starbuck" Thrace on the Sci Fi Channel's television program 'Battlestar Galactica'. In 2004, she was nominated for the Saturn Award for Best Supporting Actress on Television for her work in the 'Battlestar Galactica' mini-series. In May 2006, she won the Saturn Award for the same role. She has also starred in the horror-thriller "White Noise: The Light" and the eighth season of '24' as Dana Walsh. She currently costars in the A&E series 'Longmire' as Deputy Sheriff Vic Moretti. 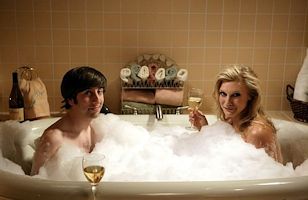 Labels: As Seen On TV, La Triviata, League of Themselves, Life During Prime-Time, O'Bservations, Splainin 2 Do, TV On TV, Zonks