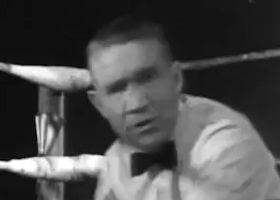 At a charity boxing match between Benny Brenoff and Leland Lamont, Callahan served as the referee. 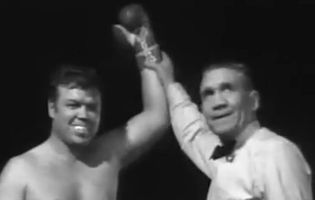 From Wikipedia:
Mushy Callahan was the ring name of Vincent Morris Scheer, a boxer and a champion in the light welterweight division.

Callahan was born on November 3, 1905, in New York City. He took the ring name of Mushy Callahan and began boxing in 1924. 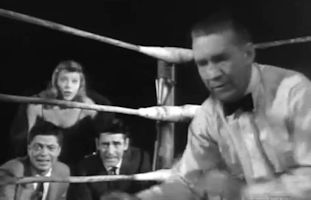 In 1930 he put his title on the line against Jack Kid Berg on February 18 in London, England. Berg knocked him out in ten rounds to win the title. There is some dispute about the title being on the line in this fight. The National Boxing Association (NBA) had stripped Callahan of its version of the title before the Berg fight. Furthermore, at the time of the Berg fight, Britain did not recognize the light welterweight division. The New York State Athletic Commission recognized the Berg-Callahan fight as being for the title, however, and Berg won NBA recognition in 1931. 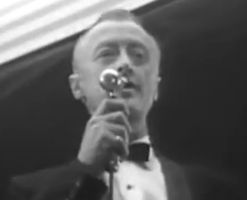 AS SEEN IN:
'Mr. Lucky'
"The Gladiators"

SYNOPIS:
For that charity boxing match at the Valley Garden, Jimmy Lennon served as the ring announcer.

Known as "The Voice of the Olympic" Auditorium in Los Angeles, California, as well as "The Irishman With the Spanish Accent." For over 40 years, Lennon's unique professional ring eloquence and dapper style of fight announcing and tuxedo attire, along with innovated showmanship and the singing of the United States National Anthem could be seen live at The Grand Olympic Auditorium or over the television networks.

Lennon first became a ring announcer in Santa Monica, California, at the Ocean Park Arena, while working there as the regular patriotic singer of the National Anthem. The regular ring announcer at the time was unavailable so the event coordinator asked Lennon if he would fill in as ring announcer. At the time Lennon was wearing a tuxedo to sing in, and also wore the tuxedo during that first announcing job. His boss liked Lennon's performance so well, he hired Lennon as the regular fight announcer, tuxedo and all. Lennon started the "Tux Announcer" style that night.

Lennon appeared in 75 productions, including "Raging Bull", "Rocky III", "Main Event", "California Split", "Tough Guys", "Kid Galahad", 'The Munsters', and 'The Monkees'. Lennon was the character of a Jakks Pacific action figure released in 2007, depicting his "Rocky III" appearance. He was the uncle of the Lennon Sisters vocal group on 'The Lawrence Welk Show'. 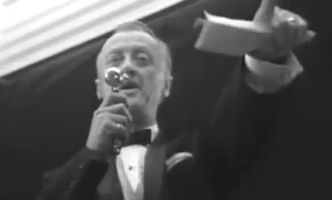 Labels: As Seen On TV, League of Themselves, Life During Prime-Time, Museum Piece, Tele-Folks Directory, Wikipediaphile