LEAGUE OF THEMSELVES - VIRGINIA MAYO 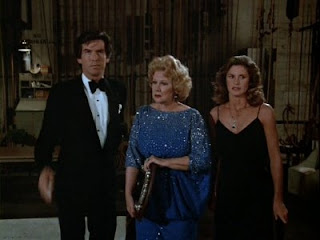 AS SEEN IN:
'Remington Steele'
"Cast In Steele"

SYNOPSIS:
The Remington Steele Agency was hired by three celebrities from Hollywood's Golden Age to find out who was sending them threatening letters.  Virginia Mayo was one of the clients while the other two were Lloyd Nolan and Dorothy Lamour.

Born Virginia Clara Jones, she began her career in vaudeville. She progressed to films and during the 1940s established herself as a supporting player in such films as "The Best Years of Our Lives" (1946) and "White Heat" (1949).