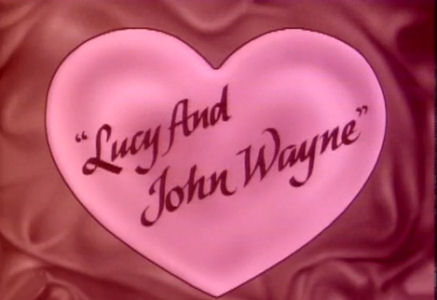 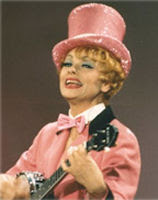 Just sit right back
And take a look
At the tale of two Lucies
And a cowboy named Duke.....

There are TV crossover chroniclers out there who don't accept celebrities playing themselves to be valid links between shows. They're welcome to run their own TV universes as they see fit, but for the Toobworld Dynamic those celebrities have not been "caught in the act of being themselves." Instead they're playing televersions - characters based on themselves who are just as fictional as the characters who interact with them.

One thing I noticed while watching most of the 'Rifleman' marathon on AMC every Saturday morning (I missed the last two weeks because yet another DVR committed "queue-icide".), is how many actors kept repeating as guest stars on the show, and always in different roles. Sometimes - as was the case with John Anderson or Chubby Johnson - they'd appear in back-to-back episodes.

At least frequent guest stars Peter Whitney and Robert H. Harris changed their appearances with each new role, so they'd each be unique. But the others? And yet the regulars in North Fork never seemed to notice the similarities between these characters. Toobworld Central has come up with a couple of splainins for these cases of double vision: in the case of John Anderson's characters, there's a reasonably valid reason why so many of his characters looked alike. But with those played by John Milford, (about nine in all), the splainin is literally out of this world. (And there's another TV character connected to all of it. Can you guess "who"?)

So far, I've resisted the temptation to use a "quantum leap traveler" as the suspect for a series of repeat visits to North Fork by the same actor, but I can only hold out for so long.

But on the whole, there has to be a simpler, more generic, "one size fits all" reason as to why a TV character never notices that so many people he runs into - like 'Columbo' with all of the John Finnegan and Vito Scotti characters - look exactly alike.

The basic splainin has to be that there's just something unique about each of them that differentiates them to other TV characters, but which is unseen by the audience viewing at home in the Trueniverse.

This all brings me around to Lucille Ball. You remember Lucille Ball, don't you? In case you didn't notice, today's posts are all dedicated to the memory of Lucille Ball who would have turned 100 years old today.

Usually the look-alike characters are the guest roles, but this time it's a guest character - a televersion - who encountered a couple of TV series stars who could have been "identical cousins".

Several celebrity televersions have crossed the paths of more than one character played by Lucille Ball. But since Inner Toob is also celebrating the TV Western all month, we're going to use the one true king of the cowboys, John Wayne, as our televersion example.

In late 1955, while the Ricardos and the Mertzes were in Hollywood so that Ricky could pursue a movie role, Lucy decided to steal the cement block of John Wayne's footprints outside Grauman's Chinese Theatre to keep as a souvenir. But you know Lucy.....

'I Love Lucy'
"Lucy And John Wayne"
Lucy is spotted while attempting to "collect" a cement block with John Wayne's footprints from Grauman's Chinese Theater. To avoid publicity and keep Lucy out of jail, Ricky enlists John Wayne's help in replacing the block. One mishap leads to another, and the plot thickens -- as does the cement. John Wayne guest-stars. 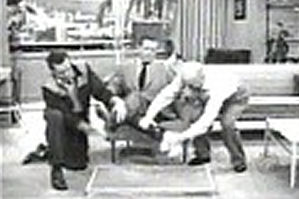 'The Lucy Show'
"Lucy And John Wayne"
When Mr. Mooney sends Lucy to the movie studio to deliver some papers regarding the financing on John Wayne's new film, she ignores his warning not to bother Mr. Wayne and finds herself lunching with him. Nervous and excited, Lucy proceeds to talk his ear off and finally splatters him with ketchup. Mr. Wayne takes that as his exit cue, but Lucy soon tracks him to the set of his film, where she continuously screws up the production.

There's no recap, but if you still want to read more about the episode.... 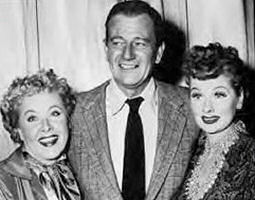 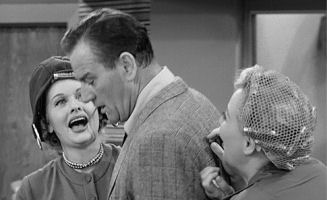 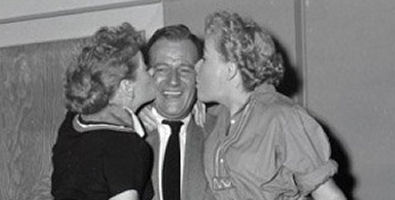 Now, granted, a mega-star like John Wayne is going to run into a lot of people over the course of his career, and he'd probably forget many of them. But how could he forget Lucy Ricardo, especialy after a stunt like that with the cement? Yet when he meets Lucy Carmichael for the first time, there's no sense of recognition, no sense of the expected horror actually, in his eyes.

You'd think at least the ketchup in the face would have served as a trigger to unlock the memories of another redhead who turned his life topsy-turvy for a day...... 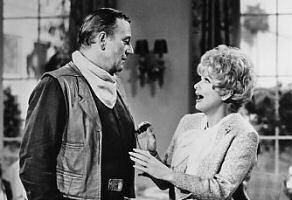 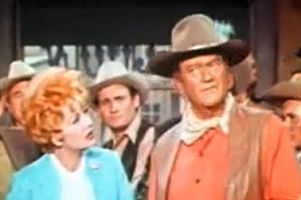 Here's some video from that 'I Love Lucy' episode. It was actually the second of two parts. (John Wayne didn't appear in the first part.)

Lucy and the Grauman's Caper make the news

I just wish YouTube had the whole replacement cement sequence!

And after eleven long Lucy-free years, he runs into her "identical cousin" in that episode of 'The Lucy Show'. (At least this for this one, I found the full episode online!)


And not once does the Duke ask if she's the redhead who's married to the Cuban bandleader......

On a side note, I think the televersion of John Wayne was at that point in his career where he was making TV movies. This didn't have the look of a big screen venture to me.......

I have a feeling that if John Wayne ever met Lucille Carter ('Here's Lucy', perhaps while contracting the services of Harrison Carter's Unique Employment Agency?) or Lucille Barker ('Life With Lucy', which would have had to happen years before the series premiered in 1986, since he died in 1979), then the same sequence of events would have happened. The Duke would have been ambushed by some slapstick disaster inadvertantly engineered by yet another dizzy redhead... and he would have no recollection of ever meeting someone just like her in years past.

Wouldn't that have been a wonder to behold? 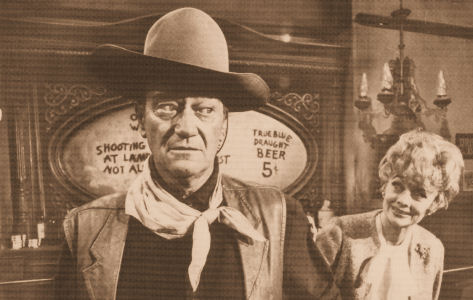 Your theory about the televersion seeing something different has to be true, and works for other general appearances by the guest where they are different characters--especially in prominent roles. There are two major examples from Star Trek that prove it. (And we can't use the real world excuse of random casting or that they couldn't write it that 'you look like him' because the second episode hadn't been written yet...)
1. Mark Lenard as the Romulan Commander in Balance of Terror and as Spock's father, Sarek, in Journey to Babel.
2. William Campbell as Trelane, The Squire of Gothos, and the Klingon Captain Koloth in the Trouble With Tribbles.
Genetically, the Commander could look like Sarek, because their species are cousins. But Spock didn't comment, except to raise his eyebrows...and nobody else realized he looked like a famous Federation Ambassador, either. Kirk, later, didn't recognize Sarek as looking like the Commander. Spock does state that the Balok puppet from The Corbomite Maneuver has elements that remind him of his father's face (although compared to Sarek, I can't see it...) So, clearly, Sarek and the Commander don't look that much alike to people who see them up close and personal, like Kirk and Spock.
For Trelane, I recall seeing a comment in a fan magazine stating that Trelane must have snuck a peek at some Klingons once when he was younger. (Actually, the writer did make the wise comment that it was a compliment to the performer's abilities that they were asked back to do another role....) I guess it's just an optical illusion that Trelane looks like Koloth.
But that leads me to another comparison for voices: Trelane's mother was voiced by Barbara Babcock, who also appeared as the voice of Gary Seven's Beta 5 computer in Assignment: Earth and the voice of Commander Loskene in The Tholian Web and as the voice of The Lights of Zetar, plus two full appearances as Mea 3 in A Taste of Armageddon and Philana, Parmen's wife, in Plato's Stepchildren. I suppose you could easily ignore the Beta 5's circuits, and the Enterprise's translator circuits, as coincidental. (Especially since in A Taste of Armageddon, Mea's father, Anan 7, actually used a voice duplicator to pretend to be Kirk and attempt to con the crew.) And nobody would recall Trelane's mother's voice except Kirk and being a human, it would pass. Now, however, Mea 3 and Philana are a different story. Mea was a bit of a love interest, so Kirk should figure that Philana resembled her. Since the Sahndarans/Platonians are thousands of years old, perhaps if she was male, I could say she fathered a child there and passed her genetic material onward. But she wouldn't have left eggs or a child there... So we have to fall back on the races are related business, as seen in the Next Gen episode that explained all the humanoids in the galaxy, The Chase...and that Philana didn't really look like Mea, even if it looked that way to use at home. Your principle stands!

Wow! Thanks SO much for putting the time and effort into that reply. I really appreciate it and I hope other visitors will check out what you have to say on the subject......