"THE RIFLEMAN" - "THE SHARPSHOOTER"

'The Rifleman'
"The Sharpshooter"
After wondering the country for four years, Lucas and Mark finally find the ranch they’d been looking for, but the ranch comes with a price, and Lucas may have to decide between the ranch and his son’s life! (9/30/58) ('Zane Grey Theatre'—3/7/58 - Season 2 — Episode #52)
- From "The Rifleman Episode Guide" 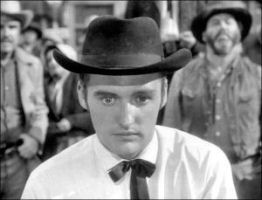 When Virgil Tippert's hand was injured in a gunfight, his days as a budding sharpshooter were over. But he would eventually be able to once again shoot a gun. So he may have devised a plan to still capitalize on what gun skills he still possessed, and yet avoid getting caught in shoot-outs against those looking to burnish their own reputations.
Virgil Tippert may have become one of the world's first professional celebrity impersonators.

Lucas and Mark McCain arrived in North Fork, New Mexico, in 1881, just in time for the annual turkey shoot contest. That year it was held in October, about 3½ months after the death of William Bonney, AKA "Billy The Kid".

From Wikipedia:
Billy the Kid, also known as William Henry McCarty, Henry Antrim and William H. Bonney (allegedly November 23, 1859 – c. July 14, 1881) was a 19th-century American frontier outlaw and gunman who participated in the Lincoln County War. According to legend, he killed 21 men, but he is generally accepted to have killed between four and nine.

Virgil Tippert bore an uncanny resemblance to Billy the Kid, at least the one who was forced to back away from a gunfight with a 'Sugarfoot' lawyer named Tom Brewster. (The evidence for the resemblance between Virgil and Billy can be found in the pilot episode of 'Sugarfoot'.) 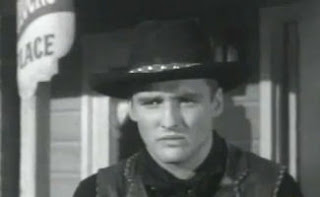 Here's what Wikipedia had to say about those claiming to be Billy the Kid:
Legends grew over time that Billy the Kid had somehow cheated death and survived, despite eyewitness accounts of his slaying. In 2004, researchers sought to exhume the remains of Catherine Antrim, McCarty's mother, "so her DNA could be tested and compared with DNA to be taken from the body buried under the Kid's gravestone". Ultimately, the case was bogged down in the courts, "much to the delight of New Mexico Governor Bill Richardson, who knows all too well the value of Billy as a cultural icon and a draw for tourists". Several men have claimed to be McCarty over the years, and at least two became notable because they were successful in persuading a small segment of the public.

The Billy the Kid who arrived in Blue Rock was the cousin to the town mayor, Barney Turlock*. So he may have been Billy Turlock rather than Billy McCarty/Bonney. But he still decided to take on the moniker "Billy The Kid" to embellish his reputation. 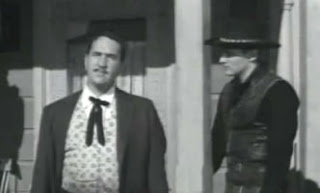 But if this Billy the Kid was able to capitalize on the name, there would be plenty of people who would think he was the real Billy the Kid. And Virgil Tippert could cash in on that by impersonating that version of the legend. (At the time of the 'Sugarfoot' pilot, there was no notice [wanted poster] out on Billy according to Tom Brewster. So he hadn't gone very far yet in establishing his notoriety.)

A Wild West show - of which there were plenty in Toobworld, including Buffalo Bill's (as seen in 'The Murdoch Mysteries') - would have gladly paid Virgil Tippert to do dramatic recreations of Billy the Kid's life.

(Dennis Hopper played Billy the Kid in 'Sugarfoot', as well as Virgil Tippert in 'The Rifleman'.)

* In the real world, Barney Turlock may have been inspired, at least in name, by Doc Scurlock. 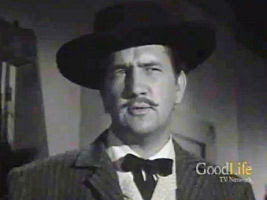 From Wikipedia:
Josiah Gordon "Doc" Scurlock (January 11, 1849 – July 25, 1929) was an American Old West figure, cowboy and gunfighter. A founding member of the Regulators during the Lincoln County War in New Mexico, Scurlock rode alongside such men as Billy the Kid.
Posted by Toby O'B at 12:00 AM