HOW SHAMELESS IS THE DOCTOR? 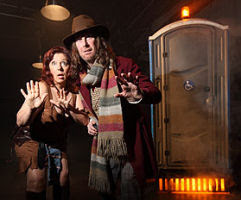 Stuart's costume at his comic book shop's New Year's Eve party on 'The Big Bang Theory' wasn't the first time a TV character has dressed up as the Fourth Incarnation of the Doctor in a Toobworld show that should be sharing the same TV dimension. It happened in 'Freaks and Geeks' and 'Kingdom' as well.

The characters from the UK version* of 'Shameless' seen here are Frank and Monica Gallagher. They're gussied up as the Doctor and his Companion Leela, with a port-o-potty serving as their TARDIS.

The same splainin used to avert a Zonk with those other shows would apply here as well.

* The American version of 'Shameless', starring William H. Macy, will premiere in January on Showtime.......

Labels: Life During Prime-Time, Splainin 2 Do, Twipped from the Headlines, Who's On TV, World Toob, Zonks