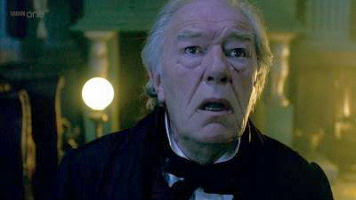 Based on the dates listed on his portrait, Elliot Sardick died in 4378, twenty years before the 'Doctor Who' special "A Christmas Carol" took place. The population of the planet on which he lived was definitely descended from the Terrans of Earth, as Kazran Sardick mentioned the seasonal customs back on the homeworld in the old days. (The planet wasn't named, but I've read that it was called Snow, which seems to have been laying it on a bit thick.)

And most of the character names are definitely Terran in origin - Abigail Pettigrew, her sister Isabella, Isabella's husband Benjamin, and someone named Eric. By the 44th Century, human names don't seem to have changed that much.

Even Kazran's father had a first name that can be found in the 21st Century - Elliot Sardick. So how did this Scrooge-like guest character end up with a first name like Kazran?

I think the answer is pretty simple: he was given his mother's maiden name to be his first name.

We've seen this happen before in Toobworld. In 'Centennial', based on the book by James Michener, it was a Garrett family tradition for the first-born son to bear the mother's maiden name. There was Messmore Garrett, Beeley Garrett, but the tradition is broken with Paul Garrett. (If I remember it correctly, he should have been Lloyd Garrett as his mother was the daughter of Jim and Charlotte Lloyd.)

There are two other pozz'bilities for this kind of name game. FBI Agent Seeley Joseph Booth has an unusual first name; it could be that Seeley was his mother's maiden name. (So far as I can tell, it hasn't been addressed yet in the series 'Bones'. They've only addressed the "fact" that he's related to John Wilkes Booth.)

And then there's the son of Major and Nancy Jamison on 'I Dream Of Jeannie', played by Bill Mumy in "Whatever Became Of Baby Custer?" The full name of Custer's mother could have been Nancy Custer Jamison.

So Kazran, a surname which I found easily enough through googling to be in actual use, could have been the surname of Elliot Sardick's wife. (And I even found Sardick, albeit as a first name. Perhaps his mother had been a Sardick....)

Whatever the reason, it at least made Kazran Sardick singular enough that we'll probably never see the name used ever again in a TV production. But then again, I would have said the same thing about Harcourt Fenton Mudd.......

Labels: Game of the Name, TV timeline, Who's On TV

You need to come down South, friend. We have a grand tradition of using family names, including mother's maiden names, for Christian names. It has been done in the past in my family and is all over the rosters at my school!

And it's not Southern, but you get a great example of it in literature (and with some adaptations)--in Pride & Prejudice, Mr. Darcy's first name is Fitzwilliam, which, as seen with his cousin Col. Fitzwilliam, is a family surname.

You are mental. And a top man. Happy new year!