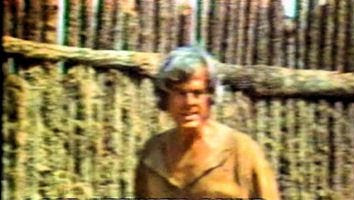 As I mentioned earlier, I went to the Paley Center for Media on Thursday to see the two "From Sea To Shining Sea" specials from 1974. These were supposed to be just the first two of a series of nine that would lead up to the Bicentennial, but no others were made. (Thumbnail review - great casts but not all that compelling, despite being written by Ernest Kinoy and directed by Buzz Kulik.)

The first one was "Give Me Liberty" and was set in 1774-75, ranging from the Virginia frontier back to the more settled area around Alexandria and then up to Philadelphia. The second one, "Land Of The Free" began on the shores of Massachusetts and ended down South on the road to New Orleans in 1814.

In both, Robert Culp played the same character, John Freeborn. 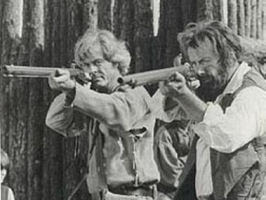 Now, the time that passed between those two periods would approximately be about the same time span that Robert Culp himself went through from his days as a 'Columbo' murderer to the time leading up to his death just last week. And that passage of Time left its mark on him as it does on all men: 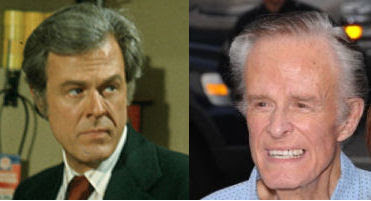 And yet, in these two TV specials, John Freeborn didn't age at all. In fact, when he should have been in his 70s, Freeborn was serving on board a British navy vessel; pressed into service after his own ship had been seized at sea.

When I pointed this out the other day, I made an off-hand suggestion that since John Freeborn was something of an "Eternal Man", as Trent was described in the opening narration for "Demon With A Glass Hand" on 'The Outer Limits', then perhaps Trent used one of those Kyben time-mirrors to go back even further in Time. (Off-hand, glass hand. Heh heh....)

But that was forgetting my own rule of thumb (more hand imagery!) about following Occam's Razor - always go for the simplest splainin.

I was too eager to combine Robert Culp characters to tighten up the TV Universe. Instead, I should have used John Freeborn as a way to connect the two historical specials to another TV series, which would have the same effect.
I should have seen John Freeborn for what he really was - an Immortal. Like MacLeod in 'Highlander'. 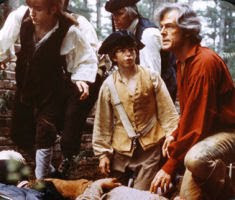 The name "John Freeborn" could be looked upon as an alias, to cover his real identity from centuries, even a millennium, earlier. It's true we don't see him with a sword, but that could have been hidden among his supplies on his pack animals. And he might have lost it when he was captured by the English in March of 1812. Eventually he would have gained a new one, but it was just something we never got to see happen.

Another scene, right at the very beginning of "Land Of The Free", could also be interpreted as proof that Freeborn was an Immortal. We see him being dragged ashore in the Massachusetts surf by young Jamie MacGillivray, a Connecticut schooled, 1/8th Creek Indian (played by Jeff Conaway). Jamie leaves him there on the beach and goes off to look for supplies.

It could be that Jamie was dragging Freeborn's body on shore, knowing his secret that he would come back to life in a few minutes despite drowning at sea. He looked near as dead lying there on the beach.

After that, we can then play the guessing game as to which of Culp's characters in the future could have been John Freeborn under an alias. So long as his TV Western characters survived the episode they were in, I think they're fair game. (They also shouldn't be the bad guys. Not that John Freeborn was the all-too-noble white-hat guy; he was a peddler just trying to mind his own business and to make sure he got paid his due. At one point, after he made it back to America in 1814, Freeborn was determined just to quit the young republic and go to the Indies.)

I wouldn't include Culp's first leading role, that of Hoby Gilman in 'Trackdown', among the other aliases for Freeborn. Toobworld Central has other ways to link that show to the main TV Universe - 'Wanted: Dead Or Alive', 'Zane Grey Theater', and 'I Spy'. 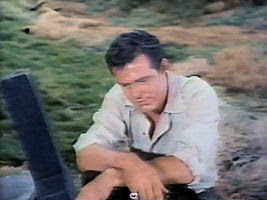 And besides, too many details about a character's past life can come up when he has an extended run on our TV screens. Better to use somebody who's in and out in just one hour.

Among the candidates to be John Freeborn under another name could be:

Ed Payson - 'Bonanza': "Broken Ballad"
Robert Culp as a former gunfighter trying to live down his past.

Baylor Crofoot - 'Wagon Train': "The Baylor Crofoot Story"
Schoolmaster Baylor Crofoot persistantly turns the other cheek when provoked by a blustering bully. But it seems that he holds these principles only to mask his cowardice.

Craig Kern - 'Rawhide': "Incident At The Top Of The World"
A howling prairie storm known as a "Norther" and a cattle drover with emotional problems, known only to Gil Favor, threaten to hamper the Sedalia-bound cattle drive in more ways than one.

At the very least, Kern and Crofoot could be the same character but not necessarily John Freeborn.... 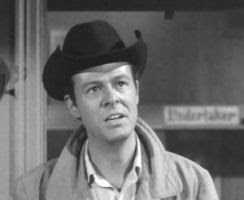 A little further up the Toobworld timeline, I'd like to add Lyle Pettijohn of 'Roots: The Next Generation' to the list of possible new identities for John Freeborn. The fact that he would have incorporated his old name into his new identity makes it especially appealing. As he wasn't the focus in the story (O'Bviously), I don't remember there being much personal background given to his character. (Also, he could have fathered Pvt. "Littlejohn", Dick Peabody's character on 'Combat!' The characters' timelines overlapped to the point that this would be unlikely for anybody else, but Freeborn was around a long time earlier to make it possible.)

Making any definite claims to John Freeborn's other identities at this time would be useless without seeing many of his guest roles and TV movies again. But making the claim that he was an Immortal, and thus providing a link to 'Highlander', 'Highlander: The Raven', and a batch of follow-up TV movies, is good enough for now.... 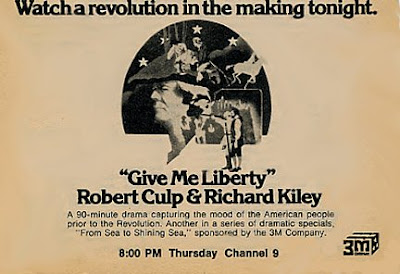 Robert Culp may have left us in the real world and taken many of his signature roles with him, but his characters of John Freeborn and Trent will live on for VERY long times in Toobworld.....
BCnU!
Posted by Toby O'B at 1:38 AM