AS SEEN ON TV: GEORGE HEARST 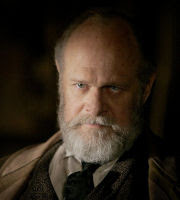 AS PLAYED BY:
Gerald McRaney

Born near Sullivan, Missouri on September 3, 1820, to John and Elizabeth Collins Hearst, George was the oldest of three children. From a young age, George worked on the family farm and received very little formal schooling.

Though Hearst had no political experience, he was nominated to the State Assembly and won a seat representing San Francisco as a Democrat in 1865. During his two years in office, he acquired the 48,000 acre Piedra Blanca Ranch at San Simeon, California and later bought several adjoining ranches that would later become the site of the famed Hearst Castle.

When gold was discovered in the Black Hills in 1875, Hearst began to take note and when the Manuel brothers discovered a large outcrop of gold in what would quickly become the gold camp of Lead, Hearst sent people to investigate. In 1877, Hearst himself arrived in Deadwood and bought the mine from the Manuel brothers and named it the Homestake Mine. Buying up additional claims in the Deadwood area, the Homestake Mining Operation soon was the largest in the Black Hills and the leading producer of gold in the United States.

For the full story, visit the "Legends Of America" website.