WALKING THROUGH PINE VALLEY IN THE SHADOW OF DEATH 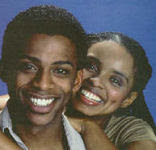 Every Friday, Caroline Hinsey has an article in the TV section of the New York Daily News about soap operas. Yesterday's column gave me a bit of whiplash:
Don't rule out a permanent return someday if "AMC's" ratings rise with Dixie's return. After all, Jesse Hubbard just made a triumphant return 20 years after being killed.
"Even if they cut your head off on camera, you can come back," (Cady) McClain says with a laugh. "Seriously, I think the fact that they just brought back Jesse makes things trickier, so I understand why this might not happen now. But it doesn't mean it will never happen.
I don't follow the soaps that closely, but I had seen the news reports that Darnell Williams and Debbi Morgan were returning to Pine Valley on 'All My Children' as their extremely popular super-couple, Jesse and Angela Baxter Hubbard. What intrigued most of those reporting the story was that Jesse had been killed back in 1988.
So when I saw the quote by Cady McClain, for alls I knew Jesse Hubbard really did have his head cut off! Now that would have been a cool challenge for Toobworld Central! However, Jesse had been shot dead while protecting a wealthy man whose life had been threatened.
Still and all, the character was dead. He even came back as a ghostly angel twice over in the 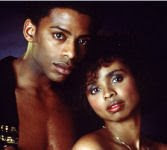 series! Now he's back again in the flesh, and the excuse the writers are using is that he never died in the first place; that he faked his death so that he could better protect his family. Which means he let Angie move to Corinth and then to New York City and remarry, first to Charles Harrison (whom she divorced) and then his identical cousin Jacob Foster (whom she also divorced).
Why did she divorce Jacob when he was the exact duplicate of her late husband (both played by Darnell Williams? Maybe he wasn't exactly identical in every department......
Nudge Nudge Wink Wink!
Jesse came up with a story about what really happened when he supposedly "died" back in 1988: he was kidnapped and his abductors faked his death. One of his captors took him to the woods and dug a grave in which Jesse was about to be buried. But instead, the captor ended up in that grave instead. 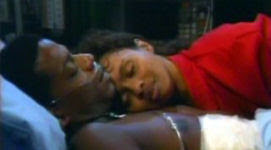 And yet, Jesse was seen expiring in his hospital bed, with Angie's head resting on his chest. Uh - huh.

And that story doesn't splain how Jesse came back in spirit form in 1994 and in 2001!
It's only my theory, but as 'Monk' would say, "Here's what happened":
Jesse Hubbard did die in his hospital bed. He was allowed to twice come back in angelic form to help out his family and his friend Tad Martin. But it wasn't enough for Jesse. He wanted to be reunited with them in corporeal form on Earth. So just as Hell has its escaped souls, so does Heaven - Jesse hightailed it out of the Fields of Elysium and back to Pine Valley. It's not exactly a story anyone would really believe (except Fox Mulder or the Winchester Brothers), so Jesse came up with the other story to cover up the truth. 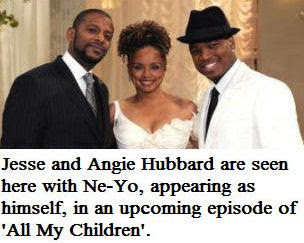 Mulling over these details, it led me to add "escaped souls" to the splainin category for recastaways in soap operas. I don't know how many times it's happened in the soaps, but every so often a character dies in a plane crash, but the body is never recovered. And then lo and behold! A few months later, the character returns alive, but is oftentimes recast with a new actor.

So I'm thinking they really did die and are now back as escaped souls from Hell. (Come on, you may like them, but most of these soap characters did commit some kind of crime when they were last on the show!) And as for the new look to their faces? It's one of the powers they have as souls. We saw this happen with Leon Czolgosz who killed President McKinley when he escaped from Hell on 'Reaper'. Only he now looked like Spence Olchin from 'The King of Queens'. 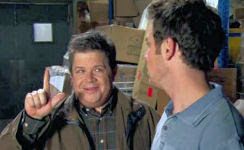 ["Leon" Czolgosz is pictured here with Sam Oliver on 'Reaper'. He's probably discussing the... shortcomings of Jacob Foster.....]
One last thing I got out of this story - Angie Hubbard and her son by Jesse, Frankie Hubbard, have been on 'All My Children', 'Loving', and 'The City'. And therefore the two of them are eligible for induction into the TV Crossover Hall Of Fame.
BCnU!
Toby OB
Posted by Toby O'B at 3:22 PM