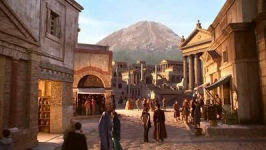 After the 'Doctor Who' episode "The Fires of Pompeii" aired in Britain, there was a discussion about Donna Noble's basic education with regards to Latin curriculum (curriculae? curriculee! curriculahahahahahaha!) requirements and the like.

This was all sparked by Donna's observation that if they were supposed to be in ancient Rome (or brand new Rome as the Doctor noted), then why was there only one hill and not seven? 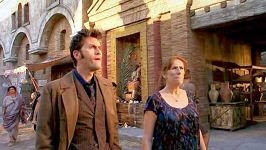 As it turned out, of course, it was because they were in Pompeii, not Rome. And that "hill" was Mount Vesuvius, pre-Big Boom.

Donna admitted that she was no expert on the subject, and she's probably not the brightest hammer in the shed (Wait, that's not right.....). But it didn't surprise me that she should know a piece of geographical trivia like that. Even over here in America, the history we learn is always governed by who dominated that history, so Ancient Rome would have been accorded great emphasis. 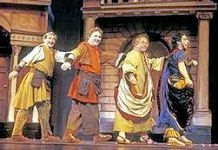 But I'd like to think there was another reason why Donna knew that there were seven hills of Rome. I think she went to see the musical "A Funny Thing Happened On The Way To The Forum" when it played on the West End back in 2004. 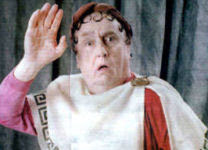 In that Shevelove/Gelbart/Sondheim musical, the slave Pseudolus needed the use of the House of Senex, who lived next door to Pseudolus' master. So, disguised as a soothsayer, Pseudolus told Senex that he had to run seven times around the Seven Hills of Rome in order to rid his home of ghosts... or something like that.

The Royal National Theatre produced the revival in 2004, which began previews at the Olivier Theatre in London on June 28 and opened on July 9, running for 76 shows before it closed on November 2. Directed by Edward Hall and choreographed by Rob Ashford, it starred Desmond Barrit as Pseudolus with Sam Kelly as Senex, David Schneider as Marcus Lycus, and Hamish McColl as Hysterium. 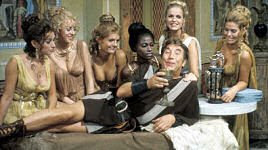 Pseudolus, which he had also performed back in the sixties. Ironically, it was this production that inspired Howerd's hit series 'Up Pompeii', in which the comic actor played the slave Lurcio. (Latin is all Greek to me - and I'm surprised that joke didn't show up in the 'Doctor Who' episode! - but maybe somebody can clue me in if that name is a joke in itself.)

I would have liked some references to 'Up Pompeii' during "The Fires Of Pompeii", but what can you do? Can't have everything, I'm told. (Still looking for that loophole!) 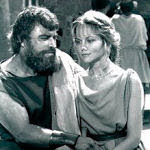 I've put the 1984 mini-series adaptation of Bulwer-Lytton's "The Last Days Of Pompeii" in my Netflix queue in hopes of finding theoretical links from that. I'm already keen on the idea that the young teen Quintus in 'Who' might have been named after a character played by Anthony Quayle! 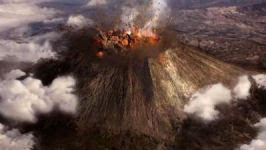 Labels: As Seen On TV, Outside the Box, Tele-Folks Directory, Tiddlywinkydinks, TV Classique, TV timeline, Who's On TV, World Toob

I don't think Lurcio was a Latin joke as such. But the -o suffix generally indicated the first person present tense form of the verb (I think...) so it would be cod Latin for "I lurk" (and it was pronounced "lurk-ee-o" in the series, rather than "lurch-ee-o" which it would have been), which is really what the character did all the time.

I was hoping "Up Pompeii" would be available via Netflix here in the States, but it looks like I'll have to find some other option in checking out the series.

Another reason I was interested in it is because the characters were featured in a panel from the latest graphic novel about the League of Extraordinary Gentlemen, "The Dark Dossier". Whatever the show's merits (or lack thereof), it had an effect on Moore and O'Neill.

Netflix did have a sequel available however, "Up The Front", which takes place during WWI. And based on the description of that (haven't watched any yet), your splainin of the name makes sense, Rob. Howerd's character in this sounds like he's a descendant of Lurcio, with his name being just Lurk.

In a way that reminds me of the later run of 'Blackadder' series....

Thanks for checking in!