"I'm talking about Bobby Charlton.
He was a prince!"
Bert
'Mulberry'

In the last episode of 'Life On Mars' during its first season, Sam Tyler reluctantly had to investigate his own father. This forced him to reconcile his memories as a four year old with the harsh realities as to why Vic Tyler really had to abandon his family.

While searching through the Tyler flat, which appeared to be abandoned, Sam found a cigaratte card with Bobby Charlton's picture. He remembered that his father gave this to him just before he vanished for good, so he knew that eventually Vic had to return to the flat and retrieve the card. So Sam settled down and waited for his father to return. 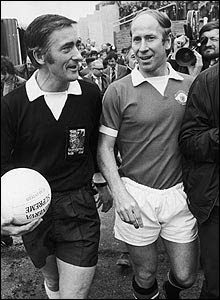 Northumberland) is a former English professional football player who won the World Cup and was named the European Footballer of the Year in 1966. He played almost all of his club football at Manchester United, where he became renowned for his attacking instincts from midfield and his ferocious long-range shot.

At the time of his retirement from the England team in 1970, he was the nation's most capped player, having turned out 106 times at the highest level. This record has since been eclipsed by Bobby Moore and then Peter Shilton.


He left Manchester United in 1973, becoming player-manager of Preston North End but decided management was not for him and left after one season. After assuming the post of the director at Wigan Athletic F.C. for some time, he became a member of Manchester United's board of directors in 1984 and remains one as of February 2008.


He set goal-scoring records for both the England team and Manchester United, with both records remaining intact some 35 years after the end of his playing career. He was knighted in 1994.

Charlton is seen here in his last game for Manchester United at Stamford Bridge against Chelsea on 28 April, 1973.

The end of Chartlon's career would have been a big deal at that time, even for a four year old Mancunian to notice. So it's nice to see that Sam would remember it in the 1973 in which he was trapped.