Beverlee McKinsey, a well-known soap opera actress of the 1970s, ’80s and ’90s who played strong women on “Another World” and “Guiding Light,” died on Friday in Los Angeles. She was 72 and lived in Los Angeles.

The cause was complications of a kidney transplant, her son, Scott McKinsey, said. (He's a director for 'General Hospital', where his Mom worked for a short time in 1994 as Myrna Slaughter.) 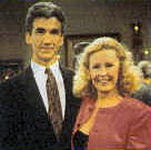 Her two best-known roles were Iris Carrington and Alexandra Spaulding. Ms. Carrington was a manipulative, father-obsessed woman on “Another World,” broadcast on NBC from 1970 to 1979. She reprised the role in 1980 and ’81 on the spinoff “Texas,” also on NBC.
From 1984 to 1992, Ms. McKinsey played the wealthy matriarch Alexandra Spaulding on “Guiding Light,” on CBS. 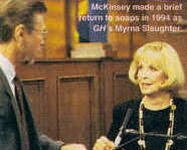 Among her other Toobworld credits are episodes of 'Hawaii Five-O' [pictured below], 'Remington Steele', 'Mannix', 'Cannon', 'Longstreet', and 'MacMillan & Wife'. Ms. McKinsey also played characters from the wild West past in 'Death Valley Days' and 'The Virginian'.

Had she only been able to play the role of Iris Carrington on a third NBC soap opera, say 'Days Of Our Lives' or 'Sunset Beach', she would have qualified for the TV Crossover Hall of Fame.

As Red Skelton would say, May God Bless..... 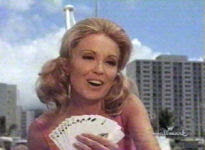 Beverlee was a wonderful actress who will be missed by many in daytime. I grew up watching her and will never forget the spark she brought to her characters. Thanks for posting this :)