A TARDIS IN THE LIBRARY


In the second season finale of 'The Librarians', Finn Carson took the team to a store room they had never seen before - the "Time Machine Room".  Here they kept various time machines confiscated in order to preserve the time-line as best they could.

Among the items under wraps were the DeLorean and the TARDIS!

Any number of splainins could be conjured for why and how the Library managed to get hold of the DeLorean away from Doc Brown.  But how could the TARDIS have been taken away from the Doctor?  Even more so, why wouldn't the "Oncoming Storm" have made every effort to get "her" back? 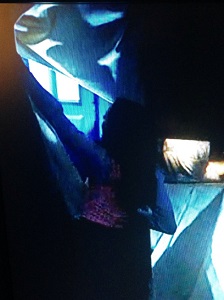 In the 1996 TV movie, the Master had been  captured by the Daleks, brought back to Skaro and put on "trial".  It was a foregone conclusion that he would be found guilty and executed.  The Doctor went to the Dalek homeworld and retrieved the Master's ashes to bring back to Gallifrey, which was the impetus for the coming adventure that led to the incarnation of the Eighth Doctor.

But what happened to the Master's TARDIS?

I think the Daleks were able to capture him on Earth.  However, he had fore-warning of their plans - and an attack on his own TARDIS in a surprise ambush would have been a good clue.

The TARDIS could have been too badly damaged to make an escape into the time-stream.  So, the Master tried to pull off a ploy that might have given the Daleks pause before continuing their attack - he used his ship's chameleon circuit to disguise his TARDIS one last time.  And he chose to make it look like the Doctor's own TARDIS, forever locked into the shape of a blue police box.

But it was a ruse that didn't work.  When the Master tried to slip away from the area in disguise, the Daleks were not fooled.  They grabbed him as he escaped and took him away quickly to Skaro, leaving that TARDIS behind.

And the Library's clipping book warning system alerted the Librarian at the time, Edward Wilde, and he and his Guardian were able to procure it for the Library's inventory.

Hey, it works for me!

The TARDIS is a member of the Television Crossover Hall of Fame with the following shows as the base for its inclusion:
And now I can add 'The Librarians' to "her" tally.... Even though it's the Master's TARDIS in this case.