AS SEEN ON TV: PASQUINEL

With the weekend editions of the "As Seen On TV" showcases, we usually deal with characters for whom we can also use video clips. When it came to 'Centennial', the first character I thought of who would definitely have a good clip was..... 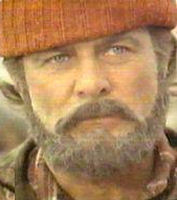 From Wikipedia:
Pasquinel (Robert Conrad), [is] a French Canadian fur trader who has gone out to the Rocky Mountains to trade for beaver pelts. Pasquinel and Lame Beaver end up confronting each other in the dead of night, with knives ready. But Pasquinel puts down his blade in an act of trust, and the two become good friends. Lame Beaver comes to see great courage and honor within this white man, and so trades pelts with him for French trinkets. 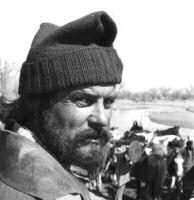 However, the beaver pelts that Pasquinel acquired from the Arapaho, as well as his remaining trade goods, are stolen. The theft occurs when Pasquinel is attacked and left for dead by members of the Pawnee tribe, even though he had promised their chief a gun if he were allowed to cross their lands safely. He is saved by Cheyenne warriors, and manages to track down the rogue Pawnee just as they are about to trade his pelts. The traders kill the Pawnee, but reveal themselves as nothing more than river pirates. The river pirates also steal the pelts and further wound Pasquinel.


Pasquinel manages to return to St. Louis, then part of the Spanish Empire, with an arrowhead in his spine. Without money, he is introduced by a surgeon to Herman Bockweiss (Raymond Burr), a Bavarian immigrant merchant and silversmith, and goes to him for backing. Pasquinel later marries Bockweiss's daughter Lise (Sally Kellerman), who is attracted to him even though he keeps leaving for long periods in order to trade furs in unknown territory.

While Pasquinel does love Lise, his main reason for marrying her is merely to gain the goodwill of her merchant father. His financing now secured, Pasquinel once again heads west and meets up with Alexander McKeag (Richard Chamberlain), a Scottish-born trapper captured by the Pawnee. He saves the Scot's life by giving the Pawnee chief the gun that Pasquinel had previously promised him. Pasquinel also gives the chief some of Bockweiss' silver, even though some of the chief's braves had previously tried to kill Pasquinel. The Pawnee chief accepts and guarantees Pasquinel and McKeag safe travel through his lands.

After McKeag's life is saved, the two become partners and lifelong friends. 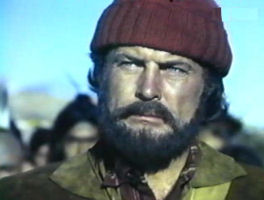 Pasquinel was the major figure of the first two chapters in the mini-series, "Only The Rocks Live Forever" and "The Yellow Apron".

Robert Conrad was not the first actor considered for the role of Pasquinel. Robert Blake and Charles Bronson were offered the chance to play the trapper, but they both turned it down. I'm thankful they did......