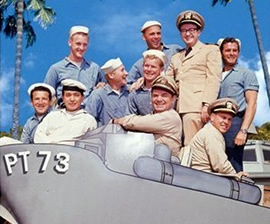 Each day this week, I thought I'd take a look at another Toobworldly aspect of 'McHale's Navy', in memory of Ernie Borgnine, who passed away at the age of 95.

I'm not as up-to-date on the WWII-era sitcom as I was with 'The Andy Griffith Show', which I not only have as a complete boxed set, but due to it being on TV several times a day for quite a few years now - most times with TV Land, used to be with TBS. On the other hand, I've only just started getting Antenna TV last year which carries it; and before that, it was hard to find 'McHale's Navy' anywhere. But when I was growing up, it was a staple of my afternoon viewing.

For today, I'd like to disable a Zonk concerning the unofficial member of McHale's crew - Fuji Kobiaji (played by Yoshio Yoda). 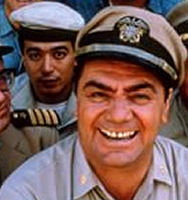 Fuji was a Japanese prisoner of war, but he served more as a mascot to the crew.  He worked for them as their "houseboy" as thanks for keeping him out of the war and out of a POW camp. They just had to make sure Fuji stayed hidden from Captain Binghamton.

In at least one episode of the four season series, but also in the feature movie "McHale's Navy Joins The Air Force", Fuji's name is given as Takeo Fujiwara rather than as Fuji Kobiaji.

But this doesn't have to be a Zonk. "Takeo Fujiwara" was his birth name, from which the nickname "Fuji" comes from. Commander McHale and his men decided it could only help his situation if that didn't become public knowledge. So they got rid of his dog tags (or whatever Japanese soldiers had for identification), and gave "Fuji" a new last name - Kobiaji.

I was tempted to make up a splainin as to it being their attempt to spell Kobayashi, and that leading to Fuji somehow being responsible for the family tree that led to the naming of the Kobayashi Maru of 'Star Trek' fame. But it's too damn hot for such pretzel logic maneuvers. 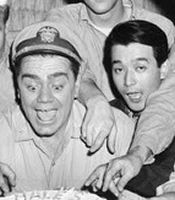 Labels: By Any Other Name, Game of the Name, Hat Squad, Keep On Trekkin', La Triviata, O'Bservations, Splainin 2 Do, TV Classique, Zonks