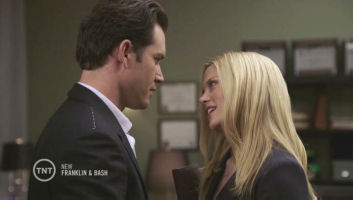 On 'Franklin & Bash', Janie Ross was the lost love in the life of attorney Peter Bash. As an assistant district attorney, she was often his opponent in court. He finally told her that he knew whenever she was lying to him - Janie had a a certain way of turning her head each time she lied.

"Oh, so now you're the Mentalist?" she sniped.

This is not a Zonk reference to the CBS procedural 'The Mentalist' starring Simon Baker as Patrick Jane.

As an officer of the court, Janie Ross would have known about the former "mentalist" Patrick Jane being a consultant to the California Bureau of Investigation. She may even have prosecuted at least one of the murder cases solved by Jane.