AS SEEN ON TV: THE GHOST OF BOB 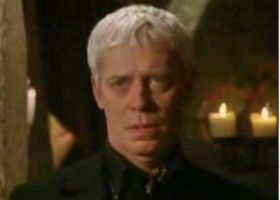 HROTHBERT OF BAINBRIDGE
aka
BOB

AS SEEN IN:
'The Dresden Files'

From Wikipedia:
Bob is a fictional character in the book series "The Dresden Files" and its TV series spin off, in which he is portrayed by Terrence Mann. The following biography pertains strictly to the television version of the character, who is significantly different from the literary version.
Bob's full name is Hrothbert of Bainbridge. A powerful sorcerer, he died in 900 A. D., apparently in England.

During his career he authored many grimoires, one of which fell into the hand of Justin Morningway, Harry's uncle. As Harry Dresden put it, there was "some pretty nasty stuff in there," including something called a "Doom Box." Harry burned Justin's copy after it came into his possession (episode 101, "Birds of a Feather").

During his life, Hrothbert fell in love with a woman, another skilled wizard (sorceress), by the name of Winifred. When she was tragically killed, he used black magic to resurrect her. For this he was condemned by the High Council to be a ghost trapped within his own skull for all eternity, unable to interact with the world in any physical way. According to the Morningway-doppelgänger, the story of Hrothbert and Winifred is legendary in some countries. Bob is still sensitive about the subject (episodes 106, "Soul Beneficiary;" 110, "What About Bob?").

Bob first meets Harry Dresden circa 1982 when the wizard, 11 years old and newly orphaned came to live with his uncle, Justin Morningway, who was in possession of Bob's skull at the time. Bob served as the boy's tutor in all things magical, teaching him the principles of black magic and the defense against it, and while practicing black magic is strictly forbidden by the High Council, Bob felt Harry ought to know it for "self defense". This comes into play years later when Harry, fully grown, comes back to his uncle's and discovers his father's ring and a voodoo doll.

He asks his uncle if he killed his father, and Justin gives him a speech resembling a manifesto about how it's time for a change - how Justin and Harry can change things. Harry realizes that Justin didn't invite the High Council for a networking session to benefit Harry, but rather as a trap to exterminate them. Harry tries to stop him, but his uncle fights back. Bob sees Harry remove the voodoo doll but doesn't say anything, knowing, as Harry does, that if Harry were to press the ring around the voodoo doll's "heart," Justin would die as the ring has been in his possession long enough to be a personal item.

When Justin summons a large shard of wood to try to thwart Harry, it is Bob who shouts out a warning, despite the fact that his skull is in Justin's possession. Justin dies when Harry's hand clutches in pain after being grazed by the shard of wood, and while Harry refuses the rest of the inheritance and gives it to charity (besides the house), he keeps Bob within his possession. Morgan, a Warden of the High Council, is opposed to Dresden's continued possession of the skull, believing that Bob is dangerous (episode 110, "What About Bob?").

There's plenty more where that came from.  Just click on that Wikipedia link above.......

The following videos were not available to be embedded, so if you want to see more then you'll have to click on these links..... 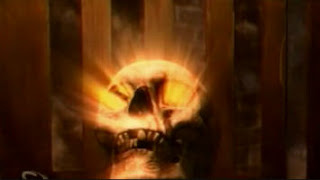