AS SEEN ON TV: IVAN DENISOVICH 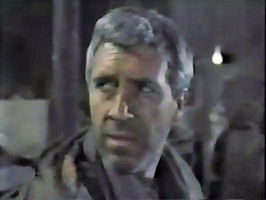 AS SEEN IN:
'The Bob Hope Chrysler Theater'
["One Day In The Life Of Ivan Denisovich")

From Wikipedia:
Ivan Denisovich Shukhov has been sentenced to a camp in the Soviet gulag system, accused of becoming a spy after being captured by the Germans as a prisoner of war during World War II. He is innocent but is nonetheless punished by the government for being a spy. The final paragraph suggests that Shukhov serves ten years.

The day begins with Shukhov waking up sick. For waking late, he is sent to the guardhouse and forced to clean it—a minor punishment compared to others mentioned in the book. When Shukhov is finally able to leave the guardhouse, he goes to the dispensary to report his illness. Since it is late in the morning by now, the orderly is unable to exempt any more workers, and Shukhov must work regardless.

The rest of the day mainly speaks of Shukhov's squad (the 104th, which has 24 members), their allegiance to the squad leader, and the work that the prisoners (zeks) do—for example, at a brutal construction site where the cold freezes the mortar used for bricklaying if not applied quickly enough. Solzhenitsyn also details the methods used by the prisoners for survival; the whole camp lives by the rule of survival of the fittest. Tiurin, the foreman of gang 104 is strict but kind, and the squad grows to like him more as the book goes on. Though a "morose" man, Tiurin is liked because he understands the prisoners, he talks to them, and he helps them.

Shukhov is one of the hardest workers in the squad and is generally well respected. Rations at the camp are scant, but for Shukhov, they are one of the few things to live for. He conserves the food that he receives and is always watchful for any item that he can hide and trade for food at a later date.

At the end of the day, Shukhov is able to provide a few special services for Tsezar (Caesar), an intellectual who is able to get out of manual labor and do office work instead. Tsezar is most notable, however, for receiving packages of food from his family. Shukhov is able to get a small share of Tsezar's packages by standing in lines for him. Shukhov's day ends up being productive, even "almost happy":

"Shukhov went to sleep fully content. He'd had many strokes of luck that day." (p.139).

A one-hour dramatization for television, made for NBC in 1963, starred Jason Robards Jr. in the title role and was broadcast on November 8, 1963.