We've polished off the old business for 2010 in the Inner Toob blog with the Toobworld Hat Squad report and the Toobits Awards presentation. Plus there was that 24 hour "Who's On First" celebration on New Year's Day. The regular Toobworld Central business got under way for 2011 with the "As Seen On TV" showcase; and now we're about to resume another Inner Toob feature - The TV Crossover Hall of Fame monthly induction.

With the month of January, our theme is supposed to be Classic TV, and our grande dame certainly fits that bill nicely. Originally I was going to save this Southern belle for the Queen of the May theme (as Chico Escuela might say, May would have been berry appropriate), but a recent loss among TV icons has altered those plans.

So instead, our inductee kicks off 2011 as the first member of this year's class: 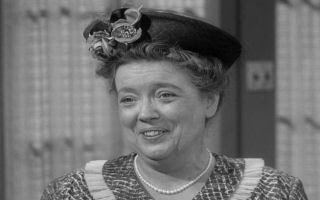 AUNT BEE TAYLOR
Bee Taylor was the unmarried aunt of Sheriff Andy Taylor in Mayberry, North Caroline. She lived with her widowed nephew and his son Opie, acting as their housekeeper and mother hen. 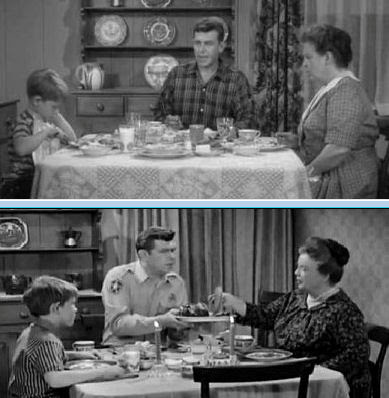 But when Andy remarried and moved away with his new bride and Opie, Aunt Bee was at loose ends - until she continued her position of housekeeper at the home of City Council President Sam Jones and his Idiot Son Mike*. 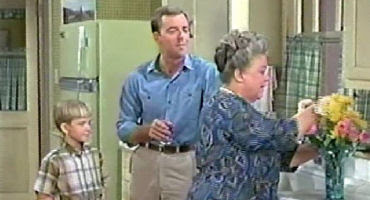 At one point, Aunt Bee traveled to California to visit a relative. While out there, she dropped by nearby Camp Henderson to visit an old friend from Mayberry - Gomer Pyle, who had joined the Marines. As should be expected from sitcoms, this led to all sorts of hilarity. (Mileage may vary.) 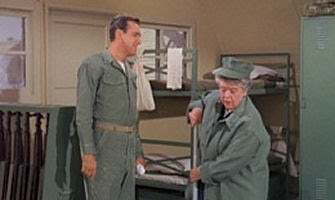 By the way, Aunt Bee did mention the name of the relative she was visiting, but while out there she could have also visited her identical cousin, Amy Morgan. Mrs. Morgan ran a boarding house in Los Angeles where she lived with her daughter Cathy and her brother-in-law Earl. 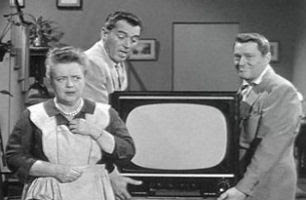 Aunt Bee's last appearance in Toobworld was something of a technicality. When Andy Taylor made his return to Mayberry in 1986, he visited Aunt Bee's grave to pay his respects. So her body was there, but her warm, cheerful (but slightly judgemental spirit had flown. Still, we heard Aunt Bee's voice in Andy's head as he reminisced about her. (The voice-over was provided by another actress and the difference can be noted. However, we have to remember that this was filtered through Andy's memories, so a Zonk is averted.) 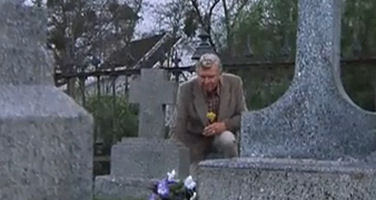 Although it was Frances Bavier in the back-door pilot of 'The Andy Griffith Show' which was shown as an episode of 'Make Room For Daddy', she was not appearing as Aunt Bee. Instead, she was playing the widow Henrietta Perkins. It could be that the reason for their incredible resemblance to each other was due to the fact that Aunt Bee's father - Andy's grand-father - was a notorious tom-catter who fooled around. (It seems a lot of that was going on in that not so sleepy hamlet of Mayberry!) And Henrietta was his love child.

Having both been raised to be proper ladies in a more dignified (repressed) society, neither Henrietta nor Aunt Bee -nor anyone else in Mayberry for that matter! - ever discussed the pozz'bility that the two women might be so closely related.

So here's to you, Aunt Bee Taylor! 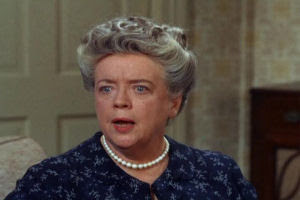 All of that work has given me a craving for kerosene cucumbers!

* That term for Mike, "Idiot Boy", comes from Ivan G. Schreve, Jr., whose "Thrilling Days Of Yesteryear" blog has a regular feature called "Mayberry Mondays" in which he puts the episodes of 'Mayberry RFD' under the microscope. The link is to the left in my blogroll, so check it out!
Posted by Toby O'B at 2:00 AM

Frances Bavier retired to NC after acting. She became a tremendous fan and supporter of the state's public television system and, at her death, bequeathed the majority of her estate to NC Public Television, including her Emmy. That is on display there now, but they benefited from many of the financial gifts she gave.